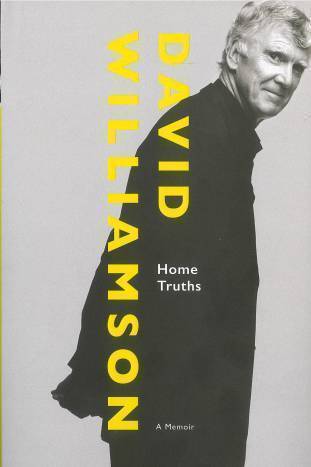 In 1980 I was in London for some weeks, mainly on holiday, but as I was at the time doing a regular radio programme in Melbourne which covered theatre, I was also aware that I would be talking about the plays I had seen in England on my return. I read (in the days when theatre performances were a stable part of newspapers) that David Williamson’s The Club was to have a production at Hampstead Theatre Club—a small but prestigious venue in north London. It was to be directed by John Bell.

I had managed to miss the MTC production of a couple of years earlier, so I rang and asked to speak to John Bell and arranged an interview with him. While there I managed to score a ticket to opening night. The play, ostensibly about Aussie Rules, is actually a beautiful depiction of political chicanery in a small organisation and it went down very well. After the final curtain descended I stood and turned in my seat only to discover I had been sitting in front of the playwright. I congratulated him on the play and had a brief conversation. It seemed to me he was quietly spoken and a bit diffident about being recognised.

A couple of month later he was at the launch of a Melbourne Theatre Company season and I recorded a brief interview with him. Again, he was quietly spoken and not at all bumptious about being one of Australia’s most popular playwrights.

This is not the confident playwright of his autobiography, Home Truths, which has recently been released and which not only takes us through his life but also expresses in bold detail his beliefs in the Australian theatre and in the whole political and social structure of this country.

What do we look for in autobiographies? Obviously, the life of the writer and his accomplishments. But for many it is a chance to justify themselves, perhaps gain revenge on people who have crossed them and show themselves in the best light. Often readers will get the feeling that they are only being shown what the writer wants them to know, perhaps a sanitised version of the life.

None of this applies to Home Truths. Williamson’s autobiography is warts and all to the point where the readers may feel a bit embarrassed at knowing so much about the private thoughts and actions not only of Williamson but also all who he comes into contact with.  He is open about his own infidelities but also those of his wife. His parent’s marriage is shown to be troublesome, mainly because of his mother’s nagging and domineering behaviour. His children also come in for some explicit detail. A few years ago Kristen Williamson, his wife, wrote a biography of David. Of it he writes ‘I did wish she hadn’t been so honest about my shortcomings’. After this I am surprised that any of his family are talking to him.

As readers we are probably most interested in his account of his plays and what impelled him to write them. It became obvious, as the years progressed, that he was tracing the path on which he trod. The Department is about the politics in a University department, which had a close resemblance with his own lecturing tenure at Swinburne. Jugglers Three although having a lot to do with the breakup of his first marriage, was set against a background of the reactions against the Vietnam war by outraged community members of Williamson’s contemporaries. The Removalists was inspired by a story told him when he was moving home and again deals with the society he was inhabiting in at the time. What if You Died Tomorrow shows the reactions of his family to a young writer who is gaining some fame.

In other words we can follow the fortunes of the playwright as he progresses up the social scale due to the success of his works and the affluence which accompanies this. Sydney beckons and we have Emerald City, he buys a beachside home in swish Noosa and Money and Friends finds a place on the stage.

From the days when he was just beginning to establish himself as a playwright it was suggested that all the characters were recognisable to those who knew the people who surrounded him.

Don’s Party, which is based on an actual election night gathering he hosted, offended so many of the people who recognised themselves that Williamson now shows an early draft of plays to his friends and asked if they are OK with the portrayal. He is quite open about the people who influence his characters but records that Robin Nevin once hit a raw nerve when she said to his wife ‘It looks like I’m playing you again!’

In addition to being influenced by those he knew, Williamson widens his perspective and admits to constantly scanning the social environments around him for plots and themes.

The book also traces the development of Australian theatre from the 1970s, when there was a vibrant new wave. The Melbourne Theatre Company, founded by Englishman John Sumner, worked on the British repertory system and mainly programmed genteel English plays, rejecting ones by Australian authors. Williamson is a little unfair here as it was the MTC which discovered and promoted the work of Ray Lawler. But because of their rejection of him and his contemporaries, up-coming talent turned to more radical ways to nurture talent and of course Williamson’s early work was featured at La Mama.

The theatrical revolution was expanded by the arrival of the Australian Performing Group, who turned an old pram factory into a performance space just down the road from La Mama. Its aim was to transform the consciousness of what they saw as socially conservative Australia. They wanted to attract a working class audience from the public housing towers dotted around Carlton. The working class stayed away, but the APG attracted an enthusiastic audience drawn from students and left-leaning academics. Williamson offered them Don’s Party. Initially they hated it because it was too middle class (the MTC had rejected it because it wasn’t middle class enough). However they needed money and Graeme Blundell persuaded them to programme it and had a big success.

From the reputation of works performed at La Mama and the Pram Factory, Williamson’s reputation grew and he was able to take on Sydney audiences at new venues there.

Ironically, as years passed Williamson’s plays became standards at the larger state theatres, both MTC and the Sydney Theatre Company relying on him to produce a hit a year. This resulted yet more criticism from those of all classes and political persuasions that he was selling out for fame and money.

While most readers will want this book because they have an interest in drama and theatre, it also demonstrates the way politics has dominated the landscape and created social change over the past 50 years. Williamson makes no secret of his left wing beliefs but is very willing to castigate those of the left whom he believes have gravely erred in judgement.

In the introduction he writes that his early plays were written when ‘the rigid social conformity of the 1950s had been disrupted by the 1960s, which brought dreams, sadly short lived … of peace love and understanding along with more sexual freedom and less repression and censorship.’ Later in the book Williamson analyses the achievements of the Whitlam government for society at large and the arts in particular.  In less than two pages, Williamson brilliantly dissects this short era and explains how it failed.

In the early 1980s the Williamson family were on holiday in Queensland and found themselves sitting at an adjacent table to the Keating family. Paul, at the time, had just been sacked from the shadow cabinet. The two families joined up and spend a couple of days in each other’s company during which Keating let them know the extent of his ambitions. He wanted to open Australia up to international competition by floating the dollar so that we would not be left behind in a super-competitive world that computer technology was about to change forever. He impressed the Williamsons who were getting a sneak preview of the new managerial Labor party.

The Liberal Party rule was one of social and political stagnation, which Williamson calls “union hating, wages lowering, social service cutting, arts and ABC punishing, with tax perks for the rich agenda of the hard neo liberals’.

When the time came for Labor to supplant the Liberals Williamson derides Keating for the neoliberal worship of the free market which leads to Australia moving from having second lowest rate of inequality in the world to being extremely unequal, because the power of the wealthy and big business who hated paying taxes. Keating, he says, was smart enough to realise that any political party which so much as mentioned wealth distribution would die in a barrage of right-wing media. This situation exists in part because Keating permitted the rise of Murdoch to be the most powerful of media barons.

It is interesting to see how these observations by Williamson become themes of such plays as Sons of Cain, Top Silk and Family Values.

Although over 400 pages long, the book is an easy read as Williamson takes us through the interwoven strands of his life, philosophy and observations of the world that makes up his work. For those whose have lived through the years he chronicles, there are many moments of recognition of people or events which we can relate to. I was especially amused at his description of how his mother managed to outsmart two other ladies of the Frankston Bowling Club to become president and then took a busload of the members to Melbourne for a revival of Don’s Party. The genteel lady bowlers reeled under the onslaught of alcohol, sex and bad language and mother felt obliged to resign as president and take herself off to the other Frankston Bowling Club. At that time my father was a committee member of one of the clubs, but he never mentioned this to me.

In addition to his plays, Williamson has written several scripts for film and television but it is his 56 plays he will be remembered.  It makes Shakespeare’s 37 look decidedly niggardly!