BOOK REVIEW: Gilbert and Sullivan: The players and the plays by Kurt Gänzl, State University of New York Press, Albany, 2021 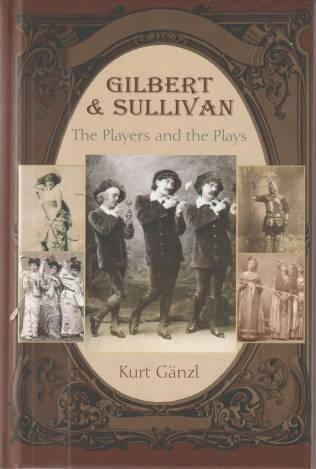 Gilbert and Sullivan by Kurt GänzlKurt gÄnzl is the go to man for anything to do with musical theatre. He has written several tomes on the subject including a two-volume set on British musical theatre, a three-volume Encyclopaedia of Musical Theatre, and more.

His approach is widespread. For example in Musicals: The complete illustrated story of the world’s most popular live entertainment, he links the origins of the genre back to opera and then to French and Viennese operetta. He includes a whole chapter on Gilbert and Sullivan and the comic operas so popular in Britain in the late nineteenth century. The book chronicles all the ensuing popular musicals of the twentieth century both in the USA and UK which were so successful worldwide. There seems to be nothing he does not know on the subject.

Gänzl’s latest publication is a book called Gilbert and Sullivan: The players and the plays. The Gilbert and Sullivan bookshelf positively groans with dozens, nay hundreds of books on the subject, so he must be congratulated on finding a new approach. He takes each of the comic operas in turn and gives a brief history and summary of the plot, but then goes on to give us fascinating details of many of the cast.

Many of the original Savoyards (so named because they performed in G&S under the direction of librettist and composer at the Savoy Theatre though Gänzl has invented the term ‘Cartesian’ for them) were celebrities in their day and their autobiographies or biographies were published. These Gänzl gives short shrift to. He is more interested in the lesser known artists who toiled in London or on many tours of the whole of Britain to bring the works to the enthusiastic public.

Some of these are so obscure that his research is amazing. There can not be a census, birth, marriage or death record that he has not found and examined. His research is not limited to the United Kingdom as the operas were quickly taken up by the Americans who took advantage of the lax copyright laws to pirate the works.

Gänzl’s style is informal. Madame Selina Dolaro, whose company occupied the Royalty Theatre when Trial by Jury received its premiere, is referred to throughout as ‘Dolly’. Other performers are treated with similar familiarity.

Even dedicated students of the Savoy will be surprised by some of the facts that appear. For example ‘Little maid of Arcady’ was published as a parlour song and therefore did not disappear like most of the music from Thespis or the Gods Grown Old. It comes as a surprise to find that it was interpolated into some American productions of HMS Pinafore, in order to increase the role of Hebe.

Some of his opinions will also raise eyebrows. He suggests that Ruddigore may have been more successful if Gilbert and Sullivan had had ‘the courage to take the sickle to the roles of Despard and Margaret’. Yet many of us would suggest that they are essential to the plot and enjoyment of the opera. He also makes a remark about the ‘silly fake ending’ of The Yeomen of the Guard. Again, to most of us this is one of the strengths of the piece. It is opinions such as this which enhance the quirkiness of this book.

It is the potted biographies of the performers which give this book its uniqueness. He cherry picks the ones who interest him and gives us extraordinary detail of their lives.

The knowledgeable theatregoer will have heard of George Grossmith, who created all the comic baritone roles and Jessie Bond, the lively soubrette, so Gänzl omits them. Some of the performers he chooses to feature are almost as well known, such as Rutland Barrington (who wrote two autobiographies) and Richard Temple, the originator of the bass roles. There are brief mentions of Fred Sullivan, the composer’s brother and the informally adopted daughter of Gilbert and his wife Kitty, Nancy McIntosh.

He really shines when he picks on these who are all but completely unknown. It was not the custom to name the chorus in programs at the time. However the nine bridesmaids in Trial by Jury are listed by their surnames only. Gänzl has tracked them down and brings us snippets about each of them. Only one, Linda Verner (her real name, Hannah Sarah Palmer), the chief bridesmaid, remained for any length of time with the Carte organisation. The others moved on in the theatrical world or left it to marry. It is of interest to learn that Cissie Durrant, whose career was going well until she became part of a tour to Australia where she met and married a wealthy landowner. On his death she inherited ‘the lot’, which included the land on which Sydney’s Her Majesty’s Theatre stood. After it burned down in 1902, she teamed up with J.C. Williamson to rebuild it.

There are twelve in the jury, but from the program we only learn that they are Messrs Bradshaw, Husk, etc. But Gänzl lists and expounds on them all.

Act 2 of Ruddigore is set in a picture gallery and shows the portraits of seven of the hero’s ancestors. These are the only members of the chorus named. Once again, Gänzl has discovered all about the performers.

Of the individual people that are picked out in the book, some have raised the curiosity of enthusiasts over the years. The original ‘plump and pleasing’ Little Buttercup, was sung by Harriet Everard. She had enjoyed a successful career until she was cast in HMS Pinafore at the age of 35. When the cast of The Pirates of Penzance was announced for London’s Opera Comique, she was to perform the role of Ruth, the piratical maid of al work. But she was replaced at short notice by Emily Cross. Everard had suffered an injury during rehearsal when a piece of scenery fell on her head. Although Emily Cross was intended to be a short-term substitute, Miss Everard never recovered sufficiently to return to the stage.

I was delighted at one mystery solved. Neither the program for Thespis nor the libretto sold at the theatre mention a character called Venus. However a researcher in the 1960s discovered that there was such a character and it was played by a Miss Jolly. She is obviously the prototype of all elderly ugly ladies that were to come. Nineteenth century critics were given ample column inches for their reviews and some of Miss Jolly’s lines have come down to us.

Why she was omitted from the libretto and program will never be known, but who was she? Well, she was one of a pair of singing sisters, daughters of a well-known musician John Jolly. Elizabeth and Cecilia Jolly began working as a double act in 1849 in concerts and musical theatre shows. Gänzl traces them until one, he thinks it is Elizabeth, is employed at the Gaiety in the late 1860s and is presumably the one who became Venus. Her sister has a child out of wedlock and, as happened in those days, suffered the consequences having to live in a workhouse for the last decade of her life. Elizabeth continues to perform into her 50s and then disappears entirely.

This book should be of interest to anyone with a love of theatre history. Obviously Gilbert and Sullivan fans will want it in their collections, but the myriad of information about so many artists in the late nineteenth century, who show up in a large variety of theatre and who interweave with many others who we have heard of, is in itself illuminating. Those who love theatre history should buy this book.

More in this category: « African American Entertainers in Australia and New Zealand: A history, 1788-1941: Book Review My Fair Ladies: Exhibition Review »
back to top