Welcome to the J.C. Williamson Scene Books' site – the doors are open 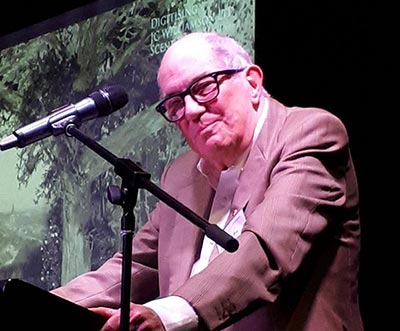 Frank Van Straten at the launch of the J.C. Williamson Scene BooksAlmost exactly five years ago, THA members caught their first glimpse of the JCW Scene Books: on Saturday May 26, 2018, we launched their digitisation (and public access via Flickr) at The Channel, Arts Centre Melbourne.

It has been a long process, and an ongoing one, beginning with that tour of Preston's Scenic Studios back in May 2013. Much time and effort was spent assembling and lodging a submission to the Public Record Office of Victoria, which proved, obviously, to be successful. Next action – "The Great Scene Books Heist" in 2015 and the months necessary for their digitising by Australian Microfilm Services (AMS). The books were returned to Scenic Studios the following year and the long, slow process of adding descriptive text and metadata to the 1000s of images on Flickr by several THA committee members began.

On Saturday, THA's president Simon Piening started proceedings with a brief overview – to a background of thirty or so projected images selected from the books – and introduced Frank Van Straten AM, who was instrumental in setting up the original Performing Arts Museum back in the 1980s in this very building. Later, for a period called the Black Box, now The Channel, the venue holds many memories for Frank – as it does for many of us present. 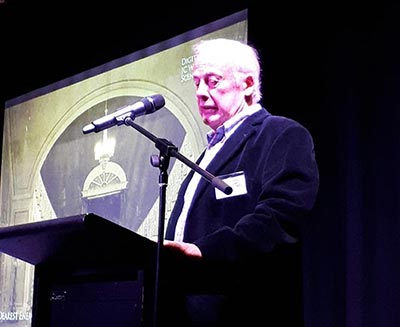 Frank spoke also of the rescue – one shared with the late Sir Frank Tait's widow, Viola Tait – of two other Scene Books, now safely housed in the Australian Performing Arts Collection, here within Hamer Hall, which led into the introduction of the next speaker, Ross Turner, master painter and co-founder of Scenic Studios, and former custodian of the ten scene books, six of which were shortly to be "unveiled before our very eyes".

At the demise of what was known as The Firm, Ross, J.C. Williamson's Head of Scenic Art, along with Paul Kathner – also present at the Launch and due to speak shortly – saved several volumes, crammed with wonderful black and white photographs of theatrical productions, dating from the late 19th century to the 1930s. Ross and Paul set up Scenic Studios, a company that continues to produce backdrops and a wide range of theatrical products and services. Ross spoke about his involvement in and love of the theatre, he mentioned the artists and designers who encouraged or influenced him, most notably George Kenyon and Rupert Browne. 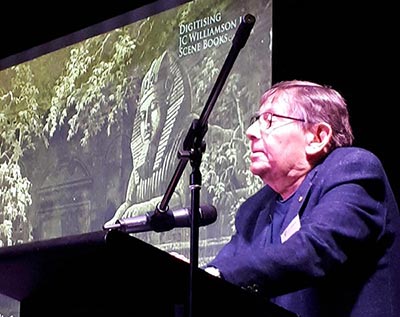 Guest speaker Paul Kathner at the launchPaul Kathner OAM was then introduced and delighted us again – Paul was THA's guest speaker at last year's AGM at the Prahran Mechanics' Institute – with his tales of his experiences working for JCW, and prior to that St Martin's Theatre – among other companies. Both Paul and Ross painted a wide variety of sets for operas, ballets, dramas and musicals. These were for JCW and for other organisations who commissioned the paint department at The Firm to undertake scenic art.

Simon thanked the speakers and then asked Frank to "do the honours" by launching the completed project with the unveiling of the books – not without a dramatic cloud of dust – for all those present to view.

The majority of the books are huge – and heavy! The three small albums (Books 2, 9 and 10) were on display, one a sketchbook with a dedication by John Henry Hennings, son of the legendary scenic artist John Hennings. The drawings and ground-plans are by George Gordon, for Dion Boucicault's late 19th century production of "After Dark". The other two albums, of London's St James' Theatre (1890s), contain highly detailed and very clear photos, images used as guides for the Australian scenic artists working on the same production.

Book 5 – 63x51x6 (25"x20"x2.5") – comprises plans and elevations, drawn predominantly in pencil. These were to a scale of half an inch to one foot, a ratio of 1 to 24 – not so different to the scale commonly used today of 1 to 25. Dozens of productions are represented – rarely is there mention of a scenic artist or designer but there are several references to stock back-cloths being used – "Phil Goatcher's standard forest cloth" sort of thing. 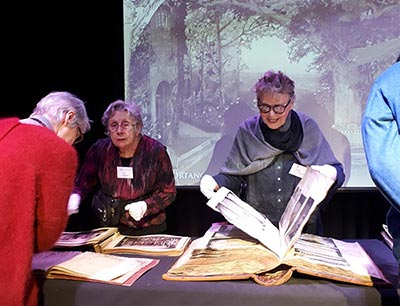 Committee members, Dr Mimi Colligan and Judy LeechBook 8 – 50x37x9 (19.5x14.5x3.5) – also on display, was originally a SHARE REGISTER, CALL & TRANSFER book, the stationer's label dated 1910. Another weighty tome! The photos show stage sets, back-cloths and lighting rigs and they are labelled with the name of the production and the act number. There are a few printed programme segments attached, relating to individual scenes.

But it was Book 6 that really intrigued many of you! Another enormous volume it contains more than 450 photographs – productions such as the Gilbert & Sullivan comic operas, The Silver King, London Pride, Daddy Long Legs, The Belle of Brittany and Monsieur Beaucaire. However it was originally an earlier ledger for accounts – which can be seen beneath the photos and also sandwiched between the pages bearing the images. The accounts date from the late 1890s – for rent shops, the Princess Theatre, admission prices, wages, production costs, etc. etc. All in black or red ink, executed in a beautiful copper-plate script. Such interest was generated at the Launch that there have been suggestions that these unique records should now be made the subject of a separate project! We will keep you notified.

The afternoon ended with an invitation to join the speakers and the committee at Bombini Buzz Bar – to enable us all to toast the Scene Books in time-honoured tradition!

A round of applause for all concerned!

IMAGES FROM THE LAUNCH

More in this category: « Max Oldaker: The Last of the Matinee Idols Commercial in Confidence »
back to top