Thousands of black and white photographs of backcloths, sets, props and curtains: where to begin? How to present a constructive and informative overview from these ten volumes covering J.C.Williamson and the years immediately before, and then into, the first two decades of the 20th century.

First things first: we wanted to discover more about the actual artists and designers themselves. Who they were, where they trained, what brought them here – to work, ultimately but not exclusively, for James Cassius Williamson. Impossible to relate in detail the backgrounds and careers of them all – rather, mention a few of those whose work is represented here within these Scene Books – although those are merely the tip of the iceberg. And to include a little colour: after viewing so many black and white images it is easy to forget the originals were far from monochromatic, although not what could be termed "Glorious Technicolour". Or were they?!

The set designer, the scenic artist, painter or designer – fine lines exist but are often smudged over – so how to determine who exactly does what? The set designer will draw up a whole stage setting (see Book 5, Plans and Elevations, or the sketches in Book 9), build a scale model or maquette, but not necessarily design, let alone paint, the cloth hanging at the back. This is up to the scenic designer and/or artist who will be bound to have an assistant or apprentice or two – or more. Their work must incorporate many different skills in order to advance or to, ultimately, pass on the craft. Knowledge of, or at least familiarity with, the roles of mechanist, carpenter, lighting director, costume designer, props maker and so forth is invaluable. 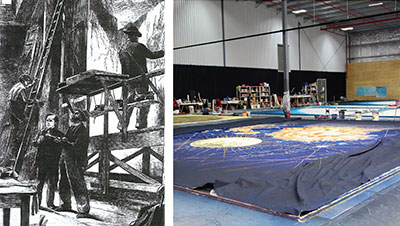 Left – the paint-frame method of painting a cloth. Right – the method generally used todayThere exists still today, at the back of Her Majesty's Theatre in Melbourne, a paint room, commonly known as the Paint Frame. It had a tall frame onto which the backdrops were tied and to allow painting access to the whole of the drop, the structure could be wound up and down. The artist worked from a stationary platform. This was after the style of the English scenic art procedures. Today's scenic artists stretch and secure the cloths to the floor, in the European style, involving a totally different method of working.

Years later, cloths may need to be repainted, refurbished or completely redesigned. There may well be strict rules governing certain back-drops – you did not "play fast and loose" with the designs for the D'Oyly Carte productions.

The cloths we see here in Books 1, 3, 4, 6, 7 and 8 may be the original work of the resident theatre artist, or may be replicated or adapted from a black and white photograph (see Books 2 and 10 for examples of these), or a drawing or sketch in colour, from England or America, or wherever the production had originated. For instance, the designers for the St. James's Theatre (London) productions of Lady Windermere's Fan in 1892 were H.P. Hall, Walter Hann and William Harford, for The Importance of Being Earnest in 1895 again H.P. Hall and Walter Hann, and for Much Ado About Nothing, T.E. Ryan in 1896, and two years later, William Lewis Telbin and H.P. Hall. The numbering that can be seen, usually bottom left hand corner, on many of the photographs related to whatever system of storage had been set up (with cloths rolled-up, folded or hung) by the Head of the Scenic Art Department or the leading Scene Painter.

In Australia one of the first artists whose work appears within these Scene Books was Edinburgh-born George Gordon, son of a very highly regarded scenic artist and landscape painter, William Gordon. From a very early age George (born in 1839) worked in London, initially for his father, and then under Thomas Grieve and Henry Telbin for Charles Kean, at London’s Princess Theatre, to later be appointed leading scene painter at the Royal in Bristol.

In 1879, at the age of forty, and five years after the death of his father, George, along with his wife and seven year-old son John (who was to follow, ten or so years later, in his father’s professional footsteps), arrived in Australia, brought out by Arthur Garner to accompany his, Garner's, London Comedy Company. Along with the older and very established scenic painters John Hennings, Alfred Clint and John Brunton, George worked for the firm Williamson, Garner and Musgrove (in 1911 to become J.C.Williamson Limited) in a position he held until the time of his death – precisely on his sixtieth birthday in 1899 – as a result of a fall whilst alighting from a Melbourne tram. Above – The Mikado - Hawes Craven (1837-1910), one of Henry Irving's designers at London's Lyceum Theatre, designed the sets for all the original G & S productions from 1885 to 1893. Below – Temple - obviously inspired by the above for the Australian production of The Mikado, and can be found in these JCW Scene BooksHis work was much in demand – memorable not only for its accuracy and realism but because it had great general appeal. He was responsible for the original Drop Curtain/Act Drop for the new Melbourne Princess’s Theatre in 1886. George and son John were the scenic designers for the late 19th century production of Royal Divorce. Other work included The Ruling Passion (1889), The Geisha (1898), Down on his Luck (1895 – a tableau vivant painted by Frederick McCubbin to which Gordon "has supplied a fine natural background"), many Gilbert and Sullivan operettas, and the spectacular pantomime Aladdin (1882).

Around 1891, ten or so years after George Gordon, London-born Philip William Goatcher (1851-1931) arrived in Australia, attracted by an offer of one thousand guineas a year. He, also, was the son of a scene painter and was first apprenticed to his father. Whilst still in his teens he made a visit to Australia where he had the good fortune to study under John Hennings, who had come to dominate Melbourne’s stage design. Goatcher then headed to New York where he went on to become a highly regarded designer. After two return trips to England, a marriage, four sons and a divorce, he became associated with the successful Savoy Operas in London and ultimately with J.C.Williamson, who held the Australian copyright on the works of Gilbert and Sullivan.

During his years with JCW he created countless stage designs for the G & S operettas, for The Arcadians, and The Silver King, the annual Christmas pantomimes – not to mention the scenery for the premiere in 1911 of Williamson’s extremely successful musical The Chocolate Soldier. No doubt he would have worked with, possibly along-side, George and John Gordon, as he did with William R. Coleman and his son (also William) and the Littles, again father and son.

To return to Philip Goatcher – a very popular and well-read man with a passion for Havana cigars – in 1906 he moved to Western Australia for health reasons (he suffered from chronic bronchitis) and set up a painting and decorating business in the capital, Perth. He was known for creating, for a number of theatres, outstanding drop curtains, only one of which still survives, painted for the Boulder Town Hall in W.A. Other examples of his theatre work exist in Kalgoorlie, Collie and New Norcia, all in that same state of Western Australia. Melbourne's Block Arcade has preserved some of his work, painted originally for the Singer Sewing Machine Company, on the ceiling of the Crabtree and Evelyn shop, at the entrance to the Arcade.

John Little, based in Carlton, Melbourne (Lynch Street, located beside the Royal Dental Hospital opposite the Melbourne University tram stop), supplied stage scenery from the 1870s up until at least the 1910s. John, born around 1850, and his son William (John Little & Sons after 1895), painted drama and pantomime scenes for various theatre firms and companies all over Australia. William, born around the mid 1870s, worked with George Dixon (of a similar age) and Leslie Board on productions such as Get Rich Quick Wallingford (1912), A Night Out (1922), Never Say Die (1914), Lilac Time (1924) and It Pays to Advertise (1916).

Leslie Board was born in Sydney in 1883. He began working for JCW in the early years of the 20th century as a pupil of George Gordon. Later he went on to become their Chief Scenic Artist. He toured England and Europe, studying productions from a scenic and artistic viewpoint. Apart from JCW's Oh Boy! (1918), Nightie Night (1921) and The Sign on the Door (1921) – just a few found here within the Scene Books – he was the scenic designer for the 1916 production of The Royal Divorce, George Gordon being the original designer back in the 1890s. Leslie Board is represented in the Art Gallery of New South Wales. 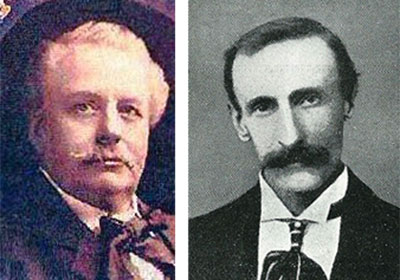 Left – Phil Goatcher. Right – W.R. ColemanWilliam R. Coleman was born in Lancashire in 1863 and first worked as an apprenticed artist, aged seventeen, at the Queen's Theatre in Manchester. At twenty he progressed to Head Painter at Liverpool's Prince of Wales Theatre before moving south to work in Bristol. Here he would no doubt have heard all about – and been encouraged by – George Gordon, his move to London, migration to Australia and subsequent success there. William arrived here not long after George's death (and ten years after Philip Goatcher's appearance on the scene) and was, at first, resident at Melbourne's Princess and also at Sydney's Theatre Royal. Initially under a five-year contract, JCW's appreciation of Coleman's ability resulted in an agreement between the two of them which lasted over twenty years. One of Coleman's sons, also William (born 1889), went on to design and paint for Frank Thring Snr's recently developed talkies' industry.

The two Colemans worked on the productions Kissing Time, Yes Uncle, Maid of the Mountains, Mary, Katinka, pantomimes, and many, many other plays and musicals. In 1913 Coleman Snr. worked with George Upward, the next generation of scenic artist, on the celebrated pantomime The Forty Thieves. Coleman accumulated glowing credits for over thirty years. Australia had well and truly come to realize that magnificent scenery filled their theatres just as it did in London! George UpwardGeelong-born George Upward (1880-1951) had the very good fortune to be apprenticed to Philip Goatcher (who had been, in his turn, influenced and trained by John Hennings and George Gordon) who mentored him and passed on as much of his craft as was possible. Upward became a most revered and prolific scenic artist, painting for the firm of JCW for fifty years. For six days of the week he would commence work at 9 am, finishing around 11 pm. He was responsible for the scenery and scale models of innumerable productions, he was the first designer to introduce the revolving stage. He left a most extraordinary legacy. Upward worked on (along with the Colemans and/or Leslie Board and George Dixon), to mention only a mere handful, Bird of Paradise (1917) Cinderella (1914), Under Fire (1916), Lightnin' (1919), Boomerang (1916), Penelope (1917), The Sign on the Door (1921), Mary (1922), plus, inevitably, all the G & S operettas.

The scenic artist J. Alan Kenyon worked in Melbourne, Sydney and Adelaide as set designer, artist and prop-maker having arrived from England shortly after the First World War. Born in 1898 in Woolwich, he died in Australia in 1972. He was JCWilliamson's scenic artist for the early 1950s Borovansky Ballet productions of Swan Lake and Graduation Ball.

More in this category: « Jennie Lee and Bleak House Frank Thornton: Man of Many Faces »
back to top