This is the first in a series of biographical pieces focusing on the performers highlighted in a recent talk given by THA members Elisabeth and Mimi at the State Library of Victoria. The talk was on the Troedel Collection of theatre posters, continuing THA’s quest to unearth theatrical gems within the library’s collection and reveal the stories behind the objects. Jennie Lee, c. 1880s. Photo by unknown photographer. Elisabeth Kumm Collection.English actress Jennie Lee (1846-1930) is best remembered for playing the role of Jo, the pathetic crossing sweeper in Charles Dickens’ Bleak House – a role she is said to have played more than 9000 times – performing it throughout the United Kingdom, America and Australia, as well as South Africa and India.

Born Emily Lee in London on 1 July 1846, she was a daughter of watercolour artist and wood engraver Edwin George Lee and his Irish wife Mary Anne Ryan. (1) Raised in a large household in Marylebone in London (Charles Dickens lived just around the corner in Fitzroy Square and along with Millais was a regular visitor), Jennie displayed an aptitude for dancing and singing at an early age. (2)

In 1869, following the death of her father, she decided to try her luck on the stage, and with a letter of introduction to Messrs Richard and William Mansell sought an opening at the Lyceum Theatre. (3) She made her stage debut as one of the twelve pages in the opera bouffe Chilperic in January 1870. The following year, she scored her first ‘hit’ as the Street Arab in Herve’s Little Faust. From the Lyceum, she moved to the Strand, where she enjoyed further successes in the burlesques The Pilgrim of Love, The Idle ‘Prentice and Coeur de Lion. Two of her sisters, Ada and Katie followed her on to the stage and at various times the three of them acted together. 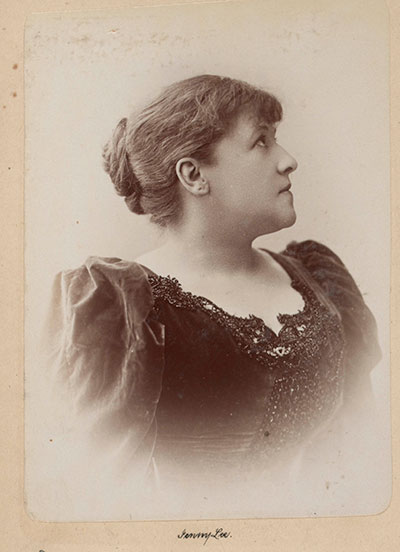 Jennie Lee, c. 1890s. Photo by unknown photographer. Photograph album of Australian actors and actresses compiled by Gordon Ireland, p. 14, State Library of Victoria.By late 1871, Jennie was in New York earning rave reviews for her performance of Mary Meredith in a revival of Tom Taylor’s Our American Cousin, with starring roles in burlesque and comedy to follow, in New York, Boston and Philadelphia.

It was in America that she married JP Burnett (1946-1917), an Edinburgh-born actor and playwright. (4) They first met in 1870 while performing at the Strand Theatre, and were reunited again in August 1872 when he joined the Walnut Street Theatre in Philadelphia where she was performing with the Vokes Family. It is not clear if their meeting was by arrangement or circumstance, but from this time on they became inseparable, but were not free to marry until late 1873.

It seems that in 1867, Jennie had wedded a certain William Parker Scott, with whom she “lived very happily” until the time of her American engagement. (5) In 1873, Jennie’s husband filed for dissolution of their marriage on the grounds of his wife’s misconduct, with JP Burnett cited as co-respondent. Jennie and Burnett returned briefly to London, but were back the USA by September 1873. In November, Jennie received her decree nisi and was free to marry Burnett. (6)

From September 1873 to August 1875, the Burnetts remained in San Francisco, performing initially at the Alhambra and Opera House and later at the California Theatre.

It was at the California Theatre that Burnett’s dramatization of Bleak House had its genesis, when in June 1875, they were supporting visiting tragedienne Fanny Janauschek. One of the plays being performed was Chesney Wold, a dramatization of Bleak House by Henry A Rendle. For this production, Jennie Lee played Jo, the crossing sweeper, with Janauschek in the double-role of Lady Deadlock and Hortense. With her emotional and heart-wrenching performance, Jennie stole the show, a performance reportedly witnessed by the Irish playwright Dion Boucicault.

It was apparently at Boucicault’s suggestion that Burnett devised his own adaptation of Bleak House as a starring vehicle for his wife. (7) On their return to England, the play had its premiere at the Prince of Wales Theatre in Liverpool on 8 November 1875, where it proved something of a sensation. The Era (13 November 1875) for example wrote:

Miss Lee’s conception and embodiment of the part could not easily be excelled, and it may rightly take rank as one of the best of modern impersonations. Her make up alone stamped the impersonation as one of the most realistic nature, faithful in every detail; and her realisation of Joe’s utter wretchedness was most artistic, natural and touching. The affecting death scene was specially good, and Miss Jennie Lee fairly secured the genuine triumph the true artist deserves. 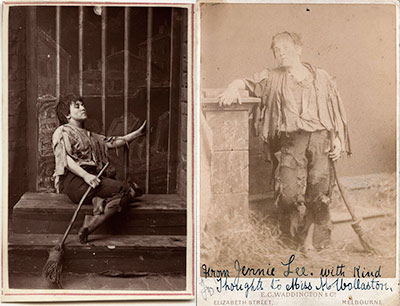 Burnett’s play is a loose paraphrase of Dickens’s novel with some of the dialogue copied directly from the original text. It roughly follows the chronology of the novel but leaves out many characters and situations. Plotlines involving Lady Dedlock, Hortense and Tulkinghorn have been preserved, but revolve around their interactions with Jo. The play culminates with Jo’s death at Tom-all-alone. (8)

An interesting story surrounds Jo’s last words. In the novel, Dickens has him say the Lord’s Prayer, ending with “Hallowed be thy …” - whereas in the play, he ends with “I’m movin on” – recalling words used by Inspector Bucket. It seems that in the original manuscript that Burnett sent to the Lord Chamberlain, the correct words were crossed out, as it was forbidden at that time to quote sacred text on the stage. (9)

Though some critics found issue with the pacing and construction of the play, audiences embraced it whole heartedly, and after touring throughout the British Isles, Jennie Lee took the play to America (appearing at the Fourteenth Street Theatre in August 1881) and then on to Melbourne, where it had its Australian premiere at the Princess’s Theatre on 29 April 1882. 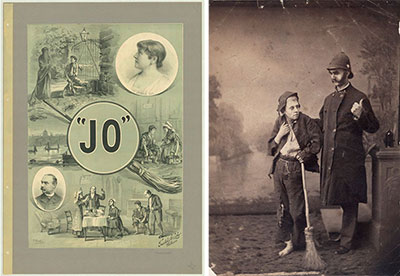 It is impossible to make Jo the leading personage in the drama but he is brought on the stage very frequently, and the part is sustained with such consummate art by Miss Jennie Lee that the interest centres in the fortunes of the poor crossing-sweeper. It is evident that Miss Lee has studied this character from the life, when she is on the stage the illusion is complete. It is difficult to believe that she has ever been anything else than the ragged London street boy. The action of the broom, the facial expression, and the little bits of bye-play, which are sparingly used, are important aids in the filling in of a very complete picture. Miss Lee has the personal advantages for this part of the petite figure and boy-like voice, without which much of the art displayed would fail of some of the intended effect. But there is also a great deal of real feeling in the impersonation, and her acting is often charged with a natural pathos which is very touching. The poor lad’s remonstrances with the police inspector for always “chivvying him on”, comic enough in the first scenes, become tragic in the last, when the victim of starvation and want, wasted with disease, knows that he is “moving on” out of this world. The death scene is artistically managed, without any objectionable prolongation. The reputation Miss Lee has gained elsewhere in this character was fully endorsed by the audience. The applause she received was of the heartiest, and she often extracted the highest tribute of moistened eyes. Grasshopper: Jennie Lee, 1882. Lithograph by Richard Wendel, Troedel & Co, Melbourne. Troedel Poster Collection, State Library of Victoria.The play was a huge success in Melbourne, playing for 5 weeks (not 5 months as Wikipedia states), before touring throughout Australia and New Zealand. Jennie Lee remained in Australia until 1885. Though she performed in other plays, such as The Grasshopper and Where’s the Cat?, that showed off her abilities as a singer and dancer, her portrayal of Jo was the one everyone wanted to see, so it remained at the forefront of her repertoire.

Jennie Lee made two subsequent trips to Australia, in 1889-1894 under engagement to Williamson, Garner & Musgrove, and in 1908 with her daughter, Joan Burnett, who had been engaged by JC Williamson Ltd to perform in Peter Pan. Sadly, a few weeks after arriving in Melbourne, Joan succumbed to tuberculosis, somewhat reminiscent of the death of Jennie’s sister Ada, who had died in Sydney in 1902 from the plague. (10) In February 1916, her sister Kate died in London, just five months before her only son, John Burnett was killed fighting with the Canadian forces in Belgium. (11) JP Burnett died in London on 17 April 1917, aged 71. (12)

Though Jennie had retired from full-time acting by 1906, the last full-length version of Bleak House being given at Drury Lane in 1896, she performed Jo on two notable occasions: on 30 March 1908 at Her Majesty’s Theatre in Melbourne when a benefit was held following the death of her daughter, and for the last time at the Lyric Theatre in London on 7 February 1921 to commemorate Charles Dickens’ birthday. Jennie Lee died on 3 May 1930 at her home in London after a brief illness, aged 83. (13)