REVIEW OF A THA EVENT by Judy Leech

In the talk entitled "Hidden Theatrical Gems Revealed"!" on Tuesday, May 27, 2014 at the State Library of Victoria, we were shown a selection of playbills, posters, photos and memorabilia from the SLV's George Selth Coppin Manuscript Collection by theatre historians Mimi Colligan and Elisabeth Kumm. These items had been in the possession of George Selth Coppin's daughter Lucy (one of his seven daughters - there were also two sons, young George and Frederick). 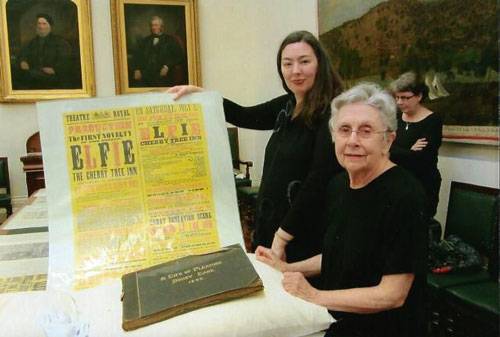 Elisabeth and Mimi with some items from the Coppin Collection. Photo Judy Leech

When Miss Lucy Coppin died, in 1960 at the age of 87, she had been assisting E.D.A.(Alec) Bagot in the preparation of a biography of her father. Miss Coppin left the papers to Alec Bagot providing, once the book was completed, he gave them to the Commonwealth National Library of Australia - now the National Library of Australia. Coppin the Great duly appeared in 1965. When Bagot died, three years after the book was published, his widow and son complied with Lucy Coppin's directive. After some time, most of the collection was distributed to the State Library of Victoria.

The selection shown represents just a tiny fraction of a vast collection, one containing a wealth of Australian theatre history - material that has been worked intensively and extensively by the State Library of Victoria's Joan Maslen and Shona Dewer.

Among the items displayed by Mimi and Elisabeth were:

Photographs of Madame Celine Celeste as Miami in "Green Bushes" (1867); Mr. and Mrs. Coppin in their homes in Richmond (Pine Grove) and Sorrento (The Anchorage); hand-coloured portrait of George Coppin as Sir Peter Teazle in "School for Scandal" (1845) plus a carte-de-visite of Coppin (New York, 1865); 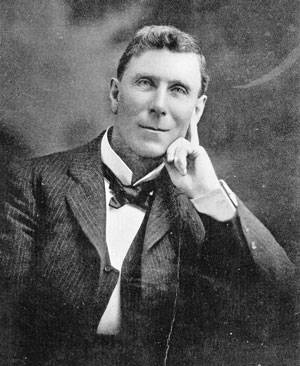 Playbill for "The Breaking of the Drought" (1902); Posters for "The Great Rescue" (1907) and for the film "The Derby Winner"(1915), a British silent film adapted from the 1894 play by Augustus Harris, Henry Hamilton and Cecil Raleigh; Photos of his wife Florence Bland Holt (née Griffiths Anderson); vision scene settings of "The Breaking of the Drought" (1902) and photographic stills from the Franklyn Barrett film of the same name (1920); Postcards advertising 'real water effect' in the production "Never Despair" (date); Drury Lane album of scenes and photographic reference for the 1893 (London) play "A Life of Pleasure" set in England and Burma.

George Selth Coppin was born in Sussex in 1819 in a village not far from the seaside towns of Brighton and Worthing. His father was an actor, and by 1826 George too was acting, singing and playing the fiddle in England, Ireland and Scotland. In 1843 at the age of 24 he travelled to Sydney with Maria Burroughs, an actress nine years his senior - she took the name Mrs. Coppin.

They toured New South Wales and Tasmania for the next three years and in June 1845 formed a company in Launceston, moving to Melbourne for a season at the newly opened Queen's Theatre, at the corner of Queen and Little Bourke Street. The repertoire included "The School for Scandal", plus Melbourne's first performances of ballet. The following year Coppin spent some time in Adelaide. Not only involved in theatre he had interests in hotels, politics, racing, mining and freemasonry.

In 1849, after a short illness, Maria died. A period in Geelong and the Victorian Goldfields followed for George, plus a return to London, in 1853 (the Haymarket Theatre) where he engaged the tragedian Gustavus Vaughan Brooke for an Australian tour. In December 1854 he returned to Melbourne with a prefabricated iron building which became the Olympic Theatre - the "Iron Pot" - where the Comedy Theatre now stands. The year after he married Harriet Hillsden, Brooke's widowed sister-in-law. During the 1850s he ran three theatres, four hotels and the Cremorne Pleasure Gardens in Richmond. (He was a member of various legislative assemblies and councils off and on up until 1895.)

In 1854 English actor-manager Clarance Holt (originally Joseph Frederick Holt), at the suggestion of George Coppin, came to Melbourne with his first wife Marie (nee Brown). He played in Geelong, Hobart and Launceston, Sydney, the Victorian Goldfields and New Zealand. In 1858 he returned to Melbourne with his family, including his seven year old son Joseph Thomas (later, known as Bland) Holt. Holt senior leased theatres in Victoria and New Zealand (his son received his education in both these places), but in 1864 he returned to England. Poster, SLV MS 882Two years after the death of his wife Harriet, George Coppin married his eighteen year old step-daughter Lucy Hilsden. The following year, in 1862 shortly after the birth of their first child, George opened the Haymarket Theatre (and the adjoining Apollo Music Hall) in Bourke Street, Melbourne. He engaged the American actor Joseph Jefferson for the Haymarket opening. He also managed to secure English actors Charles and Ellen Kean (and in 1874, James Cassius Williamson and his wife, Maggie Moore).

In 1865 at the age of fourteen, Bland Holt was a professional actor and toured England and the United States of America for the next nine years. He settled in Australia in 1876. His father back in the UK kept in close touch and he was able to secure for his son the rights for "The New Babylon", a melodrama by Paul Merritt and George Fawcett Rowe. Bland established his own company in Sydney in 1880.

The 1880s saw George Coppin back in theatre management (although he had announced his retirement in the late 1860s - none took this seriously), he set up a lucrative copyright agency, a post-office savings bank, Victoria's St. John's Ambulance - plus Australia's very first roller-skating rink. With Bland Holt, in the 1890s, he produced several lavish pantomimes. In 1900, Daisie Coppin, his youngest daughter, appeared regularly as a danseuse at Melbourne's Bijou Theatre, under the banner of Harry Rickards.
After falling ill in March 1906 at his property in Sorrento, George returned to his home "Pine Grove" in Richmond, where he died. He was survived by his wife Lucy and their two sons and five daughters, and by two of his three daughters from his first marriage to Harriet.

Meanwhile Bland Holt had become known as the King, or Monarch, of Melodrama, and he was famed for his productions' spectacular effects - involving horses and hounds, balloon ascents, pigeons, diving feats - plus the first motor-car ever to be used on stage. He frequently starred as a comedian in these productions - which he ensured were stylish - extravagant - expensive. But they paid off!

In 1883 after the death of his first wife - stage-name Lena Edwin - Bland returned to England and stayed for almost four years. He toured sensational melodramas for Sir Augustus Harris, manager of the Theatre Royal, Drury Lane, and for whom Clarance Holt was provincial agent. On Bland's return to Australia he remarried; an actress, Florence Anderson, whom he had employed in England. For the next twenty years Bland and Florence became Australia's favourite stage comedians. 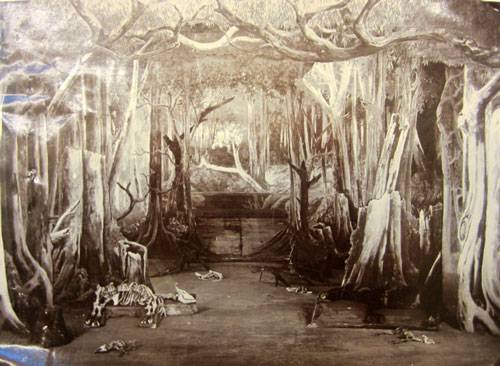 Scene from  Holt's production of The Breaking of the Drought 1902, SLV MS 882

Bland Holt's company staged meticulous, opulent and spectacular comedy-melodramas and plays right up until the beginning of the twentieth century. In 1909 both Bland and Florence decided to retire, following a tour of the Continent, North America and New Zealand, accompanied by private secretary Lucy, George Coppin's daughter. The Holts spent the next thirty years or so in some comfort and style in East Melbourne, Kew and at Miss Coppin's holiday home, The Anchorage in Sorrento,  Bland died in June 1942, Florence four years later. There were no children.

The style and business perspicacity of Coppin and Holt equalled that of their English or North American counterparts - they both, in their interpretation of theatre, shared more than a touch of the showman. The legacy of their ventures surpassed their artistic successes on stage and this legacy led the way for others - individuals who aspired to model themselves on these two great Australian actor-managers.

We are very grateful to Mimi Colligan and to Elisabeth Kumm for sharing their passions and their research with us, bringing these two men to our attention, reminding us of our fascinating theatrical heritage, and making us more aware of these two quite extraordinary men.

Published in Gallery
Tagged under

More in this category: « Pitt & Browne as architects Scenic Studios tour »
back to top