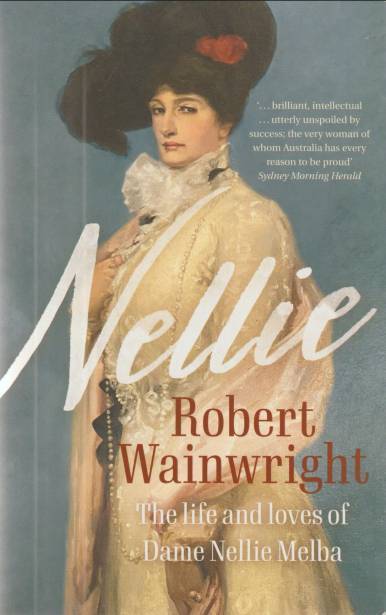 What? Another biography of Melba? I already have some half dozen on my shelves, ranging from 1909 (by Agnes G. Murphy) to 2008 (by Ann Blainey). Enough already?

Well, this one by Robert Wainwright is different. Wainwright is by no means an opera buff. Rather, he is an experienced Australian journalist and biographer with some fourteen books to his name, many of them of important Australians in a wide variety of roles—all interesting and significant, but generally forgotten since their deaths.

Melba is thus a departure from his usual subject area, remaining (as she does) the Most Famous Aussie. So, unlike previous tomes on the diva, filled as they are with premieres and debuts and accompanying dates, Nellie is focused on Melba the woman and her extraordinary personal life.

The book has at its heart four men (and two woman) whom she loved: her Scottish-born father, David Mitchell; her husband, Charlie Armstrong; her son, George; her most important lover, Philippe, Duc d’Orleans; her teacher in Paris, Mathilde Marchesi; and her great supporter at Covent Garden, Gladys, Lady de Grey.

Although she remained devoted to her father, who had become a wealthy builder in gold-rush Melbourne, he in no way supported her in her desire to become a professional singer.  But at least he was not physically abusive of her, as her young husband Charlie was in Queensland. A product of the Irish protestant landed gentry, Charlie was what used to be called ‘a man’s man’, in other words a root and branch misogynist. In time, she was well rid of him, but in the process also lost her son George, who grew up with his father in America. One of the most touching moments in Wainwright is Nellie’s reunion with the twenty-one-year-old George in 1904.

Philippe, pretender to the throne of France, was the love of her life. Born and raised in exile in England, he first saw Melba as Elsa in Lohengrin at Covent Garden in 1890. He was a guest in the Prince of Wales’s box and probably was introduced to her there. A close relationship ensued, with Philippe appearing regularly in opera houses wherever she sang—most notably in St. Petersburg and in Vienna, where the affair became shockingly public. In the end, their relationship came to nothing—he a catholic, she a protestant, he a royal, she a commoner.

Much has been written about Melba’s association with her famous teacher, Mathilde Marchesi. In reality, Marchesi provided the finishing touches to all the work Nellie had done with Pietro Cecchi in Melbourne, she gave her her performing name, Melba, and she facilitated her triumphant debut as Gilda in Rigoletto at the Théâtre de la Monnaie in Brussels in 1887. Less well known is that Nellie returned to be coached in new roles by Marchesi throughout her career.

The other woman who was to have a profound influence on Melba’s career as a prima donna was Lady de Grey. Gladys had been there at the debut in Brussels and was Nellie’s most constant (and effective) supporter throughout her early decades at Covent Garden.

However, it would be wrong to suggest that Wainwright has ignored Melba’s singing career. He covers all the major events, including the disastrous attempt at the Siegfried Brünnhilde at the Met in 1896. It is just that he’s more interested in her life than in her livelihood. Perhaps he might venture a sequel, which could explore the so far little-known, decade-long relationship between Nellie and the Australian playwright, C. Haddon Chambers?

First published in OPERA magazine, June 2022 (and reproduced with permission) 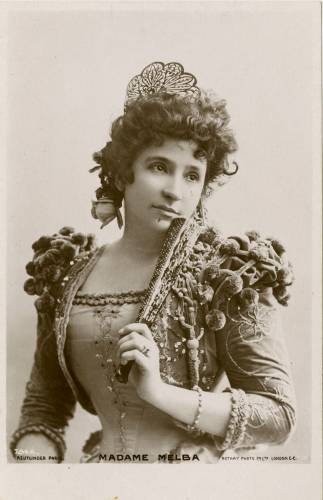 Nellie Melba as Rosina in The Barber of Seville, 1898. Photo by Reutlinger, Paris. Published by Rotary Photo, London. 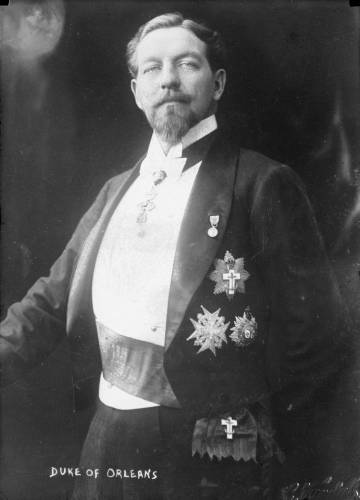 Roger Neill is a UK-based arts historian. He curated the exhibition Legends: The Art of Walter Barnett for the National Portrait Gallery in Canberra in 2000. He helped Sam Wanamaker to re-build Shakespeare’s Globe in London. His most recent book is DIVAS: Mathilde Marchesi and her Pupils. With Tony Locantro he co-produced the 4CD set From Melba to Sutherland: Australian Singers on Record for Decca Eloquence. The Simonsens of St Kilda: A Family of Singers is to be published in Australia in March 2023.

More in this category: « Sorry! House Full: Book Review
back to top