Raymond Walker has had a keen interest in theatre from teenage days. He directed his first show, HMS Pinafore, in 1971 whilst studying at St. John’s College, York. A teacher of Physics and Science, first based at Cheltenham where he directed two competition films. In 1996 he was appointed archivist for Manchester Gilbert & Sullivan Society and in 2004 he founded Victorian Opera Northwest to record lesser known British composers of the Sullivan style.

A theatre and music reviewer for Musicweb-International, in 2018 his past experience was rolled into a co-authored reference book on the D’Oyly Carte Opera Company’s stage scenery, Backdrop to a Legend. It uses their archive material now lodged at London’s Victoria & Albert Museum and the British Library and research of the artists who had created those magical settings on stage.

Setting the Scene: Gilbert and Sullivan as seen Down Under In 2016, Theatre Heritage Australia digitised the J.C. Williamson Scene Books held by Scenic Studios, Preston. The collection comprises thousands of images of JCW sets, backdrops and scenic details stretching back to the end of the nineteenth century. As RAYMOND WALKER discovers, these images have been a revelation to theatre researchers in the UK.

When searching for information on 100-year-old London-based theatre productions, it would seem unusual to turn to Australia for material. Only in the 21st century with the publication of new books and access to collections are we able to appreciate the extent of the information retained by J.C. Williamson Ltd and the Tait family over the past century.

Access to Trove, the library database managed by the National Library of Australia, has been a bonus for researchers. It uses a search engine faster than those usually found in Britain and it also seems particularly sensitive to respond to obscure keywords.

The 21st century has also brought a renewed interest for libraries and museums to improve their cataloguing and allow on-line access. All this is a boon to the researcher and allows for a fuller and fairer perspective of the role taken in Australia to promote British (and American) shows.

J.C. Williamson and his wife first visited Sydney and Melbourne in 1874 as part of an international tour, performing Struck Oil and other plays. Their reception was warm and they stayed longer than intended. They later returned to form the J.C. Williamson theatrical company, build theatres, and present shows of London and New York hits. Key to the early successes after Struck Oil was when on a visit to London Williamson struck an agreement directly with Gilbert and Sullivan to become the sole company to present their first really successful comic opera, HMS Pinafore, in the Antipodes. This led to future dealings with D’Oyly Carte, who realised that JCW could be trusted to become agent and collect royalties for all G&S operas including amateur productions. 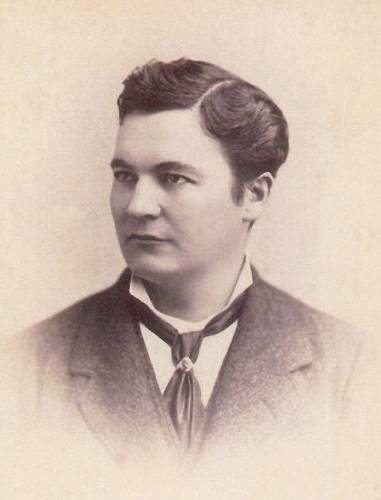 With this groundwork, JCW convinced himself that the operas should always be presented with the finery witnessed by London audiences. Furthermore, in later decades ‘The Firm’ believed that the original stage pictures should be retained so that the shows were seen as the original Victorian audiences saw them. Their scenic painters believed this also. One concession was that when London staged revivals new costume designs were commissioned, and to some extent Australia followed suit with a similar stage picture. (For instance photographs from the 1950s reveal replicas of George Sheringham’s 1929 London Pirates’ costumes.) Up to the 1950s the original Victorian-era G&S scenic design was always seen in Australia (albeit with some slight modifications.) During the 20th century no London audiences of G&S operas ever knew how the original scenery looked because it had been sold off in 1891 following a row between Gilbert, Sullivan and Carte in 1889 that had put a temporary end to the triumvirate. Also, good theatre photography was not available until the 1890s. A sprinkling of earlier photographs had been taken of The Mikado (Act II) in 1885, but it wasn’t until Utopia Ltd appeared in 1893 that stage photography began to be used to any great extent by the Company. So Melbourne can boast of being the only place in the world to reveal just how the original G&S productions looked, thanks to the scene book albums compiled by JCW from around 1894.

Costume design sketches can simply rely on the existence of a character portrait whereas scenery design relies on both artwork and models. My D’Oyly Carte Opera Company research was directly related to artwork and photographs held in the London archives of the V&A Museum and British Library, but neither depositories show any set models listed in their catalogues. One model did come to light, however, of Osbert Lancaster’s 1970 Sorcerer setting deposited in King’s Lynn, Norfolk library archives by its creator. Perhaps most models were destroyed after the scenery was made, and in the 1960s some ten of Peter Goffin’s set models used to decorate the bar at London’s Gilbert & Sullivan pub were destroyed in a fire. It is believed that any models retained by the old Company may have been thrown out by the new D’Oyly Carte Opera Company when it acquired the D’Oyly Carte store in Walworth, London. It had no interest in past events. 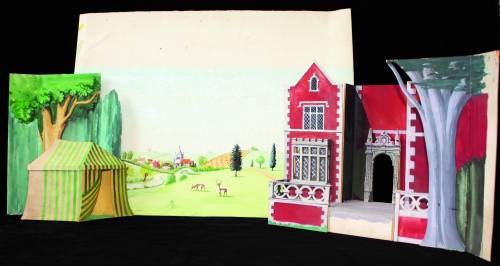 Melbourne is probably unique in the theatre world for retaining its original back cloths and borders after a show had finished touring. The JCW scenic artists maintained a slick filing scheme of photographic Scene Books for recording all scenic backcloths and borders. It is said that any back cloth depicted in the books could be retrieved within five minutes from their Richmond, Melbourne-based store. To hold such a large amount of stock scenery would have been expensive and so many back cloths were re-used by painting on the reverse side for fresh shows.

It is interesting to compare the work of the London and Melbourne painters. Some of the best British painters were attracted by good salaries to go to work in Australia. Some like George Gordon stayed and were much respected; others like Philip Howden & Walter Brookes Spong missed Britain and decided to return. The Mikado had been originally designed by London’s Hawes Craven where artwork, photographs, and a scenic plot book exist. So we have a good idea of what was presented to the London audiences for one opera at least.

Australia’s Gilbert & Sullivan artist, George Gordon, based in Melbourne, would have been sent a printed copy of The Mikado scene plot book and most probably the original (or copy) of the models as well. A set of stage photos of The Mikado, taken in the 1940s by Jean Stewart, shows much similarity to the original Act II setting. The only difference is an archway feature that has been added to the backcloth. It is likely to have been added after the London scenery had been changed in 1920—or did London copy Australia? London has no evidence of how their Act I looked until a D’Oyly Carte scene plot book was very recently found. It has been interesting to discover that the Melbourne Act I scenery of the 1950s still contained many similarities, and followed JCW’s early intention of having the audiences see what the Victorian saw. 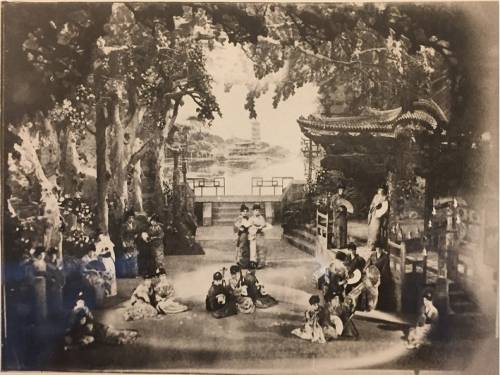 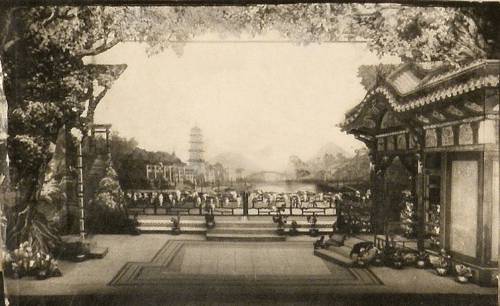 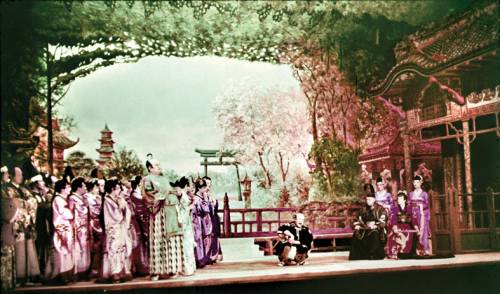 One distinct change to the London settings came when the set and costumes by George Sheringham were created in 1929. We can see that the soft rock formations have been replaced by something far more severe with exaggerated lines of strata dominating the setting. This happened during the 1920s minimalist fashion for scenery to make either a statement or become bland and muted to allow the costumes to be better noticed. Even the Sheringham Cornish coast was toned down in subsequent years to look less severe. Melbourne went along with this change for a while. 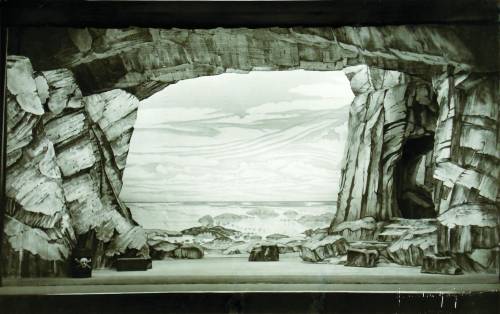 When Theatre Heritage Australia was granted permission by Ross Turner and Paul Kathner of Scenic Studios to digitise their collection of stage photographs, two fascinating settings came to light; these were of Gilbert & Sullivan’s Ruddigore. Immediately one recognised an Act I resemblance to the engraving that appeared in London at the time of the opera’s 1887 premiere. As reviewers at the London opening were severe in their criticism and box office takings had been low, Williamson wisely decided not to stage the new opera. Ruddigore was a London flop and only accumulated 288 performances so it was not brought over. When however The Firm provided a season of revivals (1926-28), with all-new scenery painted by W.R. Coleman and his son, they decided to include Ruddigore. Interestingly, Coleman based his sets on the old models that must have been sent out from London in 1887, for the similarity is amazing. The scenery continued to play until the 1950s. Giveaway features were the unusually shaped lighthouse, moored boats and prominent cottage on the right. 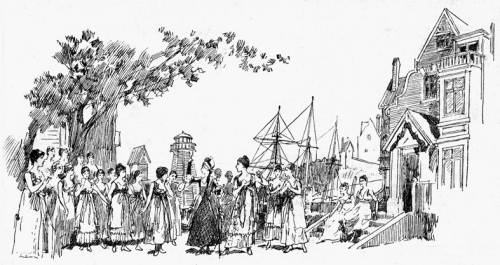 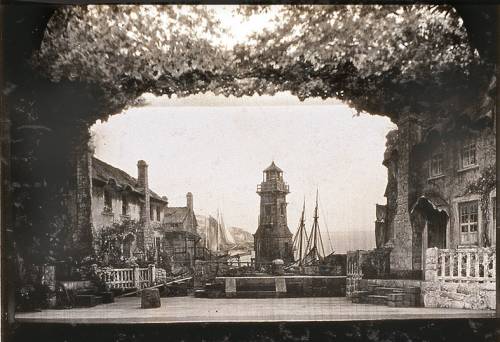 G&S researchers have found that early libretti sometimes contained sections of dialogue or lyrics deleted during rehearsal and overlooked. One interesting find relates to the scenery of Iolanthe Act I. Gilbert originally decided that his female protangonist should have the calling of a mill owner, called Perola. By making her a Ward of Chancery it would not work to have her be a miller. Plans for the production must have been at a late stage before the change to an Arcadian shepherdess named Phyllis was substituted, and the scenery must have been advanced in preparation. We find that a mill with waterwheel and bridge was provided upstage in the London set and this still appeared as such after the scenery was revised 15 years later. The Australian scenery painted by George Gordon shows a big mill pond and bridge. Attractive as the setting is, it has little to do with Gilbert’s plot and though slight mention is made of a pond, the peers went shooting over her ‘grass plot’. Williamson must have made an early decision to take Iolanthe after its London success since models of the original design were sent over; it could be that the contradiction was never spotted in London. 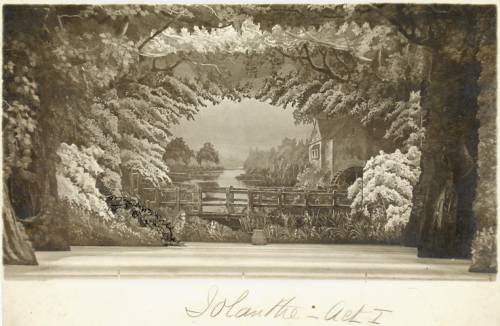 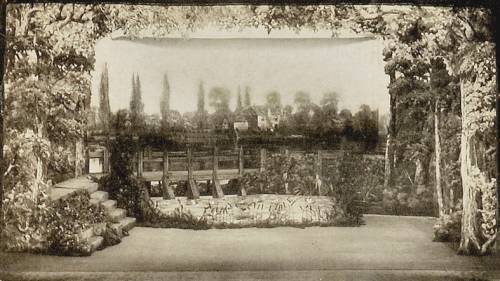 Nowadays we take it for granted that sets are often impressionistic, or carry a 3D set feature placed against a bland cyclorama. It cannot be dismissed that romantic works are best complemented by romantic scenery and that the scenery be shown in context to the mood of the show. The old craft of distemper applied to canvas was ideal because it had a matt finish and could always be restored without too much difficulty. Cut cloths were ideal because they could be easily flown. The only difficulty was that the artist had to know his art and be in a position to provide realistic drop shadows on a flat surface so that on the other side of the footlights nobody would know they were only looking at a two dimensional feature. Lighting today plays a far more important role in promoting production appeal. With gobos to provide shadowy shapes and an ability of modern sources to provide clean, pure blues, a colour never obtainable from the old straw-coloured lamps of the 1920s gives increased flexibility to the staging. This all lies in the eyes of the beholder.

Published in General articles
Tagged under
Be the first to comment!
Read more...