Australian actress Nellie Stewart (1858–1931) created hundreds of roles during her sixty-seven year stage career, performing in comic operas, pantomimes, burlesques and plays. As ELISABETH KUMM discovers, one of her most admired characterisations was the Restoration-era actress and courtesan Nell Gwynne in the play Sweet Nell of Old Drury.

Written by American playwright Paul Kester, Sweet Nell of Old Drury was first performed at the Haymarket Theatre in London in August 1900 with Julia Neilson in the title role. It was an instant success and Neilson revived the play many times during the following two decades. When it was produced in America for the first time in December 1900, Ada Rehan was the Nell. On Broadway, the play was also performed in 1923 with Laurette Taylor in the lead. But it was in Australia in 1902 with Nellie Stewart as Nell Gwynne that the play was to have its greatest popularity.

Kester’s play, which is in four acts, charts the major events in the life of Nell Gwynne. Act 1, set in London in 1667, shows Nell outside the King’s Theatre in Drury Lane, where working as an orange seller she encounters the pleasure-seeking King Charles II (in disguise) for the first time. In Act 2, now an established favourite of the King’s, Nell shelters Lady Olivia Vernon (ward of the villainous Chief Justice Lord Jeffreys), whose lover Sir Roger Fairfax has been falsely accused of treason. Fairfax is captured in Nell’s boudoir and imprisoned by Jeffreys who, wishing to undermine Nell’s position at Court, tells the King that Fairfax is her lover. Act 3 sees Nell outwitting Jeffreys by donning a wig and cape and entering his house where Lady Olivia has been held captive. By impersonating Jeffreys, Nell facilitates Lady Olivia’s escape. In the final act, Lord Jeffreys’ infamy is revealed and Nell is reconciled with the King.

At the heart of this play, Nell Gwynne, in spite of her humble beginnings, is shown to be a woman of spunk, true to her friends, and loyal to the King, and worth more as a person than the so called nobles of the Court whose motives are driven by jealousy, personal gain and duplicity. 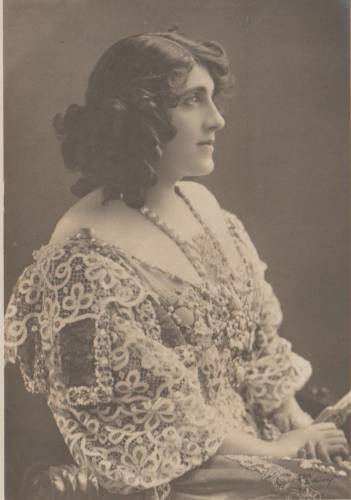 From Famous Actresses of the Day in America, second series, by Lewis C. Strang, opposite p.266.

Nell Gwynne has been the subject of numerous operas and dramas. Prior to 1900 there was The Peckham Frolic; or Nell Gwyn (1799), a three act comedy by Edward Jerningham; Douglas Jerrold’s comedy Nell Gwynne; or, The prologue (1833); John Walker’s drama Nell Gwynne, the Orange Girl (1833); Charles Reade and Tom Taylor’s drama The King’s Rival (1854); G.A. A’Beckett’s burlesque Charles II; or, Something like history (1872); a comic opera, Nell Gwynne (1876), with libretto by H.B. Farnie and music by Alfred Cellier; and a second comic opera by Farnie, also called Nell Gwynne (1884) but with music by Robert Planquette. During the twentieth century, she was the central character in Anthony Hope and Edward Rose’s comedy English Nell (1900); and in Ivor Novello and Harold Fraser-Simpson musical comedy Our Nell (1924). She also made an appearance in George Bernard Shaw’s In Good King Charles’s Golden Days (1939). 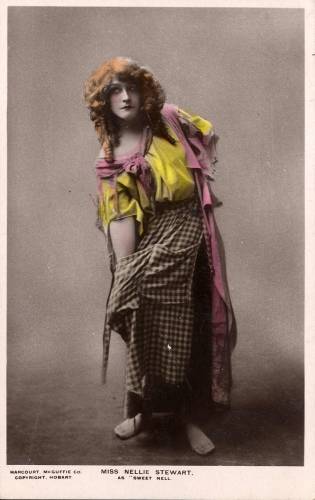 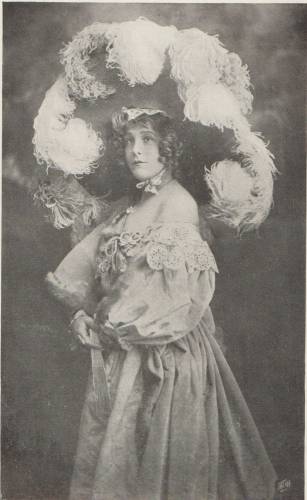 Nellie Stewart as Nell Gwynne in Act 3. Photo by Talma.

From My Life Story by Nellie Stewart, opposite p.174.

Nellie Stewart introduced Sweet Nell to Australian audiences on 15 February 1902 at Melbourne’s Princess Theatre. The Haymarket script was used, which incorporated additional dialogue and a reworked final act by J. Hartley Manners.2 The original music written for the London production by Raymond Rôze was employed throughout, including Nell Gwynne’s song in Act 2, ‘How happy the lover’, with words by John Dryden.

A sumptuous production, the scenery for the first two acts was painted by W.R. Coleman, and the final two by Phil Goatcher, possibly based on the original London designs by Joseph Harker. A special feature was the period furniture made at the Princess Theatre by William Gardiner (the property manager) from ‘drawings from the British Museum’. A harpsicord was also commissioned from Allan & Co. music warehouse, based on ‘tracings obtained at the British Museum’. The opening night program also tells us that the ‘Correct Costumes of the Period’ were by A. & L. Nathan, London, after ‘reliable authorities’ and ‘Characteristic Wigs’ were by Gustave of Paris.3 With the staging of this play, Nellie Stewart was appearing in a straight play for the first time. A well-established star of the comic opera stage, she had taxed her singing voice too much and it was no longer possible for her to maintain a career as a singing actress. The opening night reviews applauded her transition to the dramatic stage.

It is not too much to say that this performance places her amid the very first of the comedy actresses who have been seen in Australia. The brilliant success which she achieved in work of such high calibre, and so different from that in which she has been seen hitherto, was cordially and almost tumultuously recognised by the audience, who recalled her again and again at the close of every act.4

From the beginning to end Miss Stewart never failed and never flagged … There were depths in her voice that really touched the heart in the emotional passages, and there was an unconquerable gaiety and joyousness in the livelier moments with which the piece abounds.

Yet despite the positive reviews, in her autobiography Nellie recalled that for the first two weeks of the season ‘business was indifferent’ on account that people ‘associated me with comic opera and the singing stage, and they were quite unwilling to believe that I could possibly make a success in the speaking part’. George Musgrove very nearly pulled the play, but on the recommendation of Harcourt Beatty, he ‘gave it a chance’.5 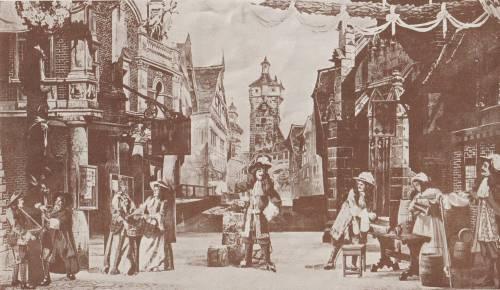 Scene from Act 1: Before the King’s Theatre, Drury Lane 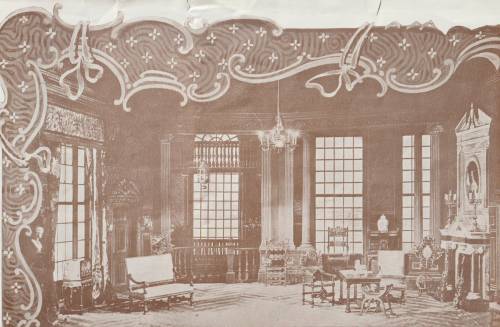 Following a five week season in Melbourne, the play was taken to Tasmania and onto Adelaide, before opening in Sydney in June, where it played a further five weeks. The Sweet Nell boom had begun.

A souvenir booklet was produced commemorating the first production in Melbourne, featuring photographs by Talma. Postcards depicting Nellie Stewart in various costumes from the play were also widely circulated.

Over the next thirty years, Sweet Nell remained a key feature of Nellie’s repertoire. In 1906 she took it to America. The company received encouraging reviews in San Francisco, but when the earthquake hit on 18 April, they lost heavily and their tour came to an abrupt end.

Act 1 set designed by W.R. Coleman and George Upward for the 1909 revival of Sweet Nell of Old Drury, when it was performed under the auspices of JCW at the Melbourne Princess and Sydney Theatre Royal. 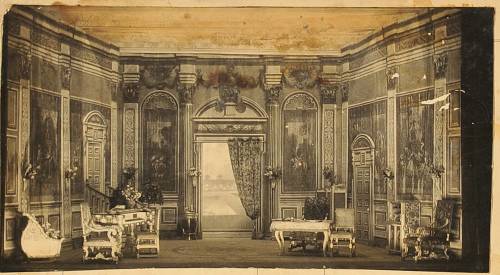 In 1911 Spencer’s Pictures arranged to make a film version of the play, inviting Nellie to recreate her role. She received a whopping £1000 for her participation, said to be half the total budget of the project! The film was shot at Spencer’s Wonderland City studio in Bondi, and in the grounds of various Sydney mansions over a six week period commencing in September 1911. The cast, which was drawn from the current touring company, included Augustus Neville as the King, Charles Lawrence as Lord Jeffreys, Leslie Woods as Sir Robert Fairfax, and Roslyn Vane as Lady Olivia Vernon. George Musgrove took on the role of director, though his inexperience soon became evident and he was replaced by Raymond Longford. The film was screened for the first time at the Lyceum Theatre in Sydney on 2 December 1911. Some 12,000 people reportedly saw the film during the first seven sessions.6 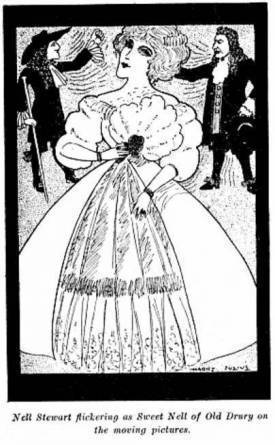 Drawing by Harry JuliusOver the coming months, Nellie was a tireless promoter of the film, making personal appearances at showings. This was to be her only foray into films. Despite screening regularly for the next six years, no copies of the film have survived.7

On 2 February 1931, to commemorate Nell Gwynne’s birthday, Nellie Stewart featured in a radio broadcast of the play Sweet Nell. Produced under the direction of Laurence Halbert, in association with Nellie Stewart, the program was aired on Sydney’s 2BL at 8.00pm (and on relay to Melbourne, Brisbane, Adelaide and other cities). Other than Nellie Stewart as Nell and Arthur Greenaway as Charles II, the cast members are unknown.

Following the success of the radio broadcast, Nellie was approached by the Columbia Graphophone Company to recorded scenes from Sweet Nell of Old Drury at their studio in Homebush, Sydney on 24 March 1931. Issued on two 12 inch 78 rpm records (catalogue numbers DO346 and DOX165), the first record featured Nell Gwynne’s entrance, Act 1, and the Finale, Act 4, with Nellie Stewart as Nell, Nancye Stewart (Nellie’s daughter) as Lady Olivia, and Mayne Lynton (Nancye’s husband) as Charles II. The second record featured a comedy scene from Act 1 and Nellie Stewart ‘Addresses Her Public’.8

Extracts from these records were featured in Ladies, Please!, a CD compiled by THA in 2010.

Nellie Stewart played Sweet Nell for the last time at a charity performance in 1931, just weeks before her death on 20 June at the age of 72. In August 1931, ‘in view of the high esteem in which Miss Nellie Stewart was held’, the Columbia Co. offered the original matrices of their recordings, ‘suitably framed and engraved’ to the Mitchell Library (State Library of New South Wales) in Sydney.9 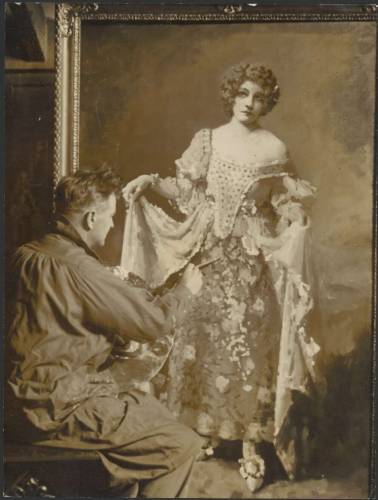 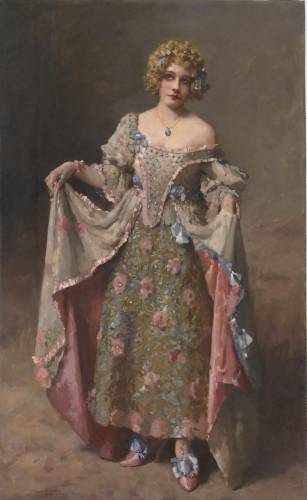 Sweet Nell lives on in other ways too. In 1930, artist William B. McInnes painted a full-length portrait of Nellie in Sweet Nell as she appeared in the early 1900s. The portrait was commissioned via subscription and presented to Nellie by Sir Robert Best on behalf of her admirers at a function at Melbourne’s Tivoli Theatre on 19 October 1930. Nellie immediately offered the painting to the trustees of the National Gallery of Victoria so that it may be placed on public view.10

In June 1931, Table Talk magazine published a full colour plate of the McInnes painting ‘ready for framing’, urging people to place their orders early to avoid missing out.11

Another portrait by Mary Edwards, also painted in 1930, depicted Nellie as Sweet Nell. Like McInnes’ painting Edwards (apparently) entered her portrait in the Archibald Prize. In late years, the portrait hung in Nancye Stewart’s sitting room.12

Further artefacts connected with Nellie Stewart’s depiction of Sweet Nell reside in various public collections. The State Library Victoria, for example, holds a turquoise ring worn by Nellie in the play, and the Australian Performing Arts Collection has an apron that she wore as part of her Act 1 orange seller costume. 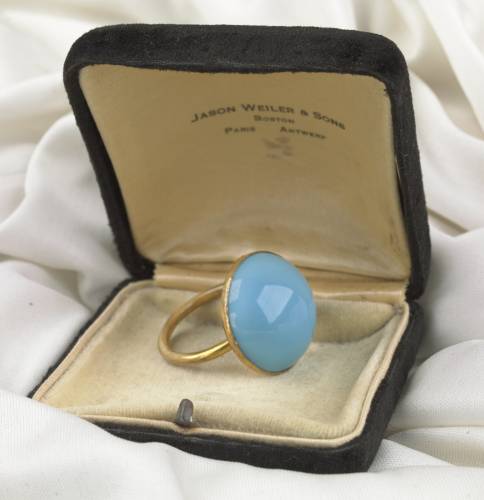 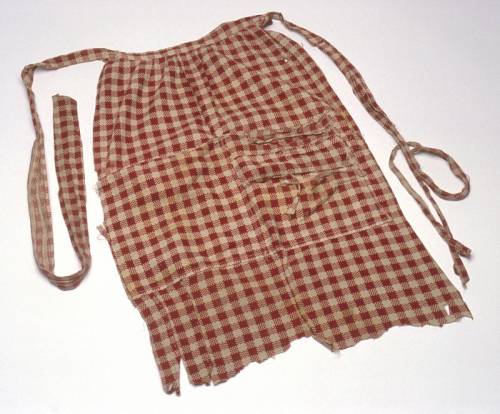 Part of a costume worn of Nellie Stewart as Nell Gwynne in Sweet Nell of Old Drury, c.1902-1931

Nellie Stewart will long be identified with her namesake Sweet Nell through the many pictures that exist, but wouldn’t it be something if the film version of her performance were discovered, so we could see her in action!