Peter Pinne concludes his account of the landmark indigenous musical Bran Nue Dae and the career of its creator Jimmy Chi. Read Part 1 of this article»

The film was shot on location in Western Australia. Most of the major songs from the stage production were included, plus interpolations of the country standard ‘Stand By Your Man’, Rolf Harris’s ‘Six White Boomers’ and ‘Zorba’s Dance’. 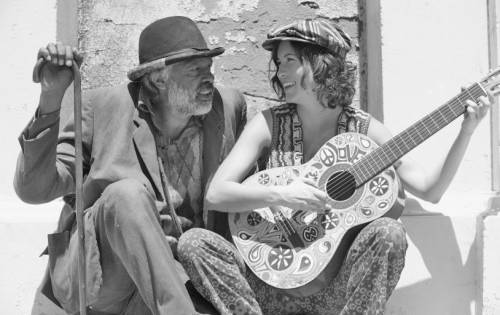 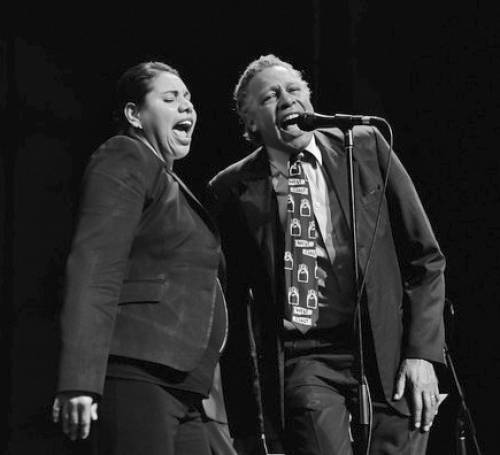 Deborah Mailman and Ernie Dingo at the premiere of the film Bran Nue Dae, 2009.

The film, like the stage show, was a joyous and uplifting celebration of Aboriginal culture, and wonderful feel-good entertainment. ‘Nothing I Would Rather Be (Than To Be An Aborigine)’ was given the full show-stopping tap-dancing treatment in the mission scene and reprised as the finale on the beach. The young performers McKenzie, Mauboy, Sultan and Higgins gave raw but endearing performances, and Dingo, repeating his stage turn, grounded the piece in reality. Rush, with an exaggerated German accent, was a stern but likeable Father Benedictus, with Szubanski and Mailman eating up the cameos of the sex-starved Roadhouse Betty and Roxanne. It was the acting debuts of Mauboy, a former Australian Idol runner-up, and Higgins, a pop performer with several hits to her credit.

Its official Australian theatrical premiere was – appropriately – at the Sun Picture Gardens Cinema, Broome, on 8 December 2009, where the stars of the film walked a ‘red dirt’ carpet. A national release followed on 14 January 2010.

The film received generally mixed reviews, scoring a 6.5* out of 10: ‘An exuberant musical road movie’ (Sunday Mail), ‘Hilarious… A celebration! The next homegrown cinema classic’ (MTV Australia); but FilmInk said: ‘It falls short of its potential, with mediocre performances and dance sequences,’ which was mirrored in the review in Variety (US): ‘Blandly stereotypical characters in a trite road-trip narrative … There’s scant real dancing, mostly forgettable, showtune-type songs and no ethnic authenticity.’

But when the movie premiered in Los Angeles on 10 September 2010, critics were kinder. Kenneth Turan in the LA Times claimed: ‘Australia’s infectious Bran Nue Dae was the equivalent of a Bollywood musical set in the outback,’ whilst Win Kang (Orange County Examiner) gave it four stars and said ‘I loved this film’.

The movie soundtrack, released on 15 January 2010, reached a peak position of 29.14 on the Australian ARIA Albums Chart. The film was later released by Roadshow Entertainment on DVD (R1098139) and Blue Ray. A separate Special Music Edition Sing-Along was also released on DVD. 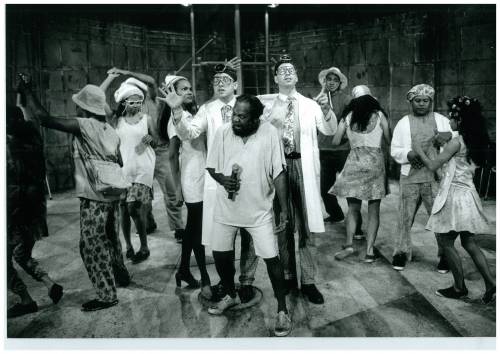 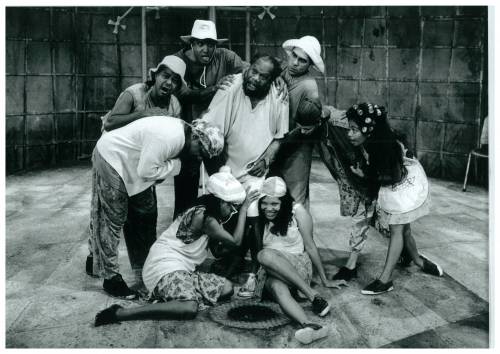 Jimmy Chi’s follow-up to Bran Nue Dae, also developed in Broome, was the eagerly awaited Corrugation Road. Like Bran Nue Dae, it was partly autobiographical. Following a breakdown while studying at university, Chi had spent time in a mental institution after he was diagnosed as schizophrenic. He struggled not only with his own cultural identity but with the legacy of some grim incidents in his early life, including sexual abuse and serious accidents. The musical was based on his experiences in mental institutions over a 20-year period.

Corrugation Road starts when Barry is arrested on Christmas Eve for spray painting ‘Merry Christmas’ on Perth’s London Court and he is committed to Graylands psychiatric hospital. From the bizarre world of the hospital ward we journey with Barry through his past, visiting his ‘local’ which undergoes transformations into a gay bar, a sleaze nightclub and a pleasure dome. Siamese twin doctors, Basketcase and Fruitcake argue their opposing views on psychiatry. Fed up with their conflict, the patients decide to operate and separate them. Liberated by their separation, Dr Basketcase leads the patients out of institutional care into the ‘real world’ – but the ‘real world’ proves inhospitable and the patients are found inhabiting an urban camp experiencing poverty, squalor and violence. Barry’s past again revisits him: he realizes he is in love with Fiona, the wife of Garry, his gay brother. Accompanied by Bob Two-Bob he journeys back to his country in the Kimberley, finally arriving at Fiona’s home, Sunday Island, where he is reconciled with his brother’s sexuality, and with Fiona. By story’s end Dr Fruitcake has arrived by helicopter to set up a Kimberley mental health service.

In Corrugation Road Chi posed questions about madness and sanity, child abuse, parenthood, sexuality and religion. As in Bran Nue Dae, the issues were presented with humour, a sense of the bizarre, and an over-riding optimism.

The score, composed by Chi, the Pigram Brothers and Duncan Campbell, followed the same country idiom as Bran Nue Dae, again with traces of blues, rock and Gospel. There were no character or plot-driven songs, although some did pay lip service to the subject matter: ‘Pop A Little Tablet’, ‘Modern Doctor Of Psychiatry’ and ‘Suicidal Blues’.

Corrugation Road played four preview performances at the Street Theatre, Canberra, 10-14 October 1996, before its premiere season at the Fairfax Studio, Victorian Arts Centre, 17-26 October 1996, for the Melbourne International Festival of the Arts.

The musical was produced by Black Swan Theatre Company. Ross directed the work, with set and costume design by Steve Nolan, choreography by Anna Mercer, and musical direction by Iain Grandage. 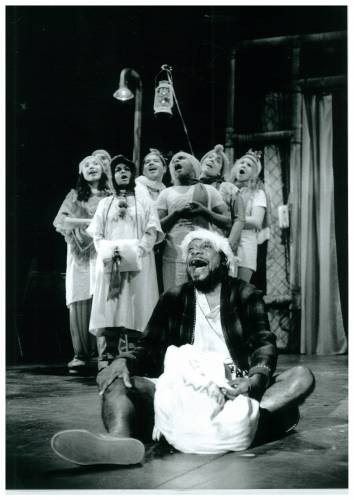 Stephen ‘Baamba’ Albert and company in the 1998 national touring production of Corrugation Road.

Critical reaction was mixed: ‘A truly Australian, often hilarious, frequently poignant, very professional, sensationally whacko show; a kind of cross between Hair and Cosi’ (Fiona Scott-Norman, Age); ‘A more ambitious project than Bran Nue Dae. But it’s only partially successful… there are too many songs in the show that just aren’t up to scratch or need further work’ (Steven Carroll, Sunday Age); ‘It is the joyful, energetic performances which carry the show, particularly Ningali Lawford, who brings a freshness to the role’ (Kate Herbert, Herald Sun).

Following the Melbourne season the show played the Subiaco Centre, Perth, from 4 November 1996. It was scheduled to close on 7 December, but due to popular demand the season was extended to 21 December. Erin McGrath in The Voice enthused: ‘Chi’s all-new musical, though containing a serious undercurrent, was as entertaining and lively as any musical of its kind that I have seen.’

According to Ron Banks (West Australian): ‘The biggest scene-stealer was John Collard as the drag queen, an appearance which snatches the initiative from Becky Brown’s very sexy nurse bump and grind routine.’

The New South Wales component of the tour included Sydney (11-22 August), Newcastle (25-29 August), Lismore (1-2 September), Woolongong (4-5 September), and Gosford (8-12 September). In Victoria it was seen at the Alexander Theatre, Monash University (15-26 September), and in Warnambool (29-30 September), Geelong, Frankston and Warragul.

The original cast of the 1996 production recorded the score in Broome. It was released by Angoorrabin Records (AR-8). The CD booklet contains lyrics to the songs.

In 1991 Jimmy Chi received the Human Rights and Equal Opportunity Drama Award for Bran Nue Dae. In 1998 he was awarded the Deadly Sounds National Indigenous Music Award for excellence in Film or Theatre Score.[4]

In 1997 Chi was presented with the Australia Council’s Red Ochre Award for Lifetime Achievement by an Indigenous Artist, and in 2004 he was acknowledged by the Western Australian Government as a State Living Treasure.[5]

Chi’s songs have been recorded by Irish singer Mary Black and Aboriginal singer Archie Roach. The song ‘Child Of Glory’ has been featured at Broome’s Opera Under the Stars Festival and has been adopted as their theme song in tribute to the composer. Chi’s hymns are regularly sung at Aboriginal funerals in Broome.[6]

Jimmy Chi’s achievement in bringing Bran Nue Dae to the stage was immense. He not only created the first Aboriginal musical, but one of the most successful Australian musicals ever. He gave a voice to indigenous culture which was joyous, uplifting and inspiring. Nothing can or will diminish his contribution to Australian musical theatre.