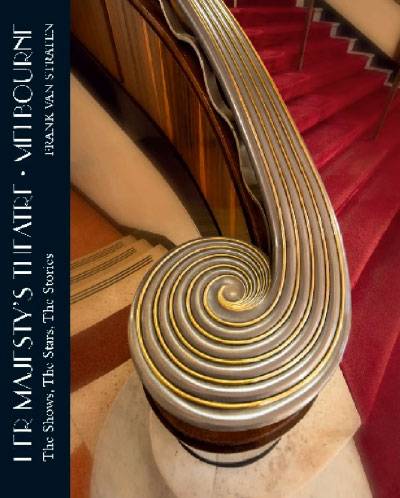 Frank Van Straten has done it again! Australia’s answer to Mander & Mitchenson and Daniel Blum has written the definitive book on Melbourne’s Her Majesty’s Theatre. At 336 pages, full colour and with more than 400 images, this book is a glorious tribute to one of the city’s iconic theatres.

The book covers the 138 year history of the site, bringing to life in words and pictures the rich legacy and important role that The Maj has played in nurturing the cultural and social life of Melbourne.

The book was instigated by Mike Walsh, the owner of the theatre since 2000. Under Mike’s able direction, the theatre continues to be an important part of Melbourne’s East End theatre tradition. A spectacular $12 million refurbishment programme in 2002 has ensured the theatre remains vital and relevant. The foyers and auditorium are now the premier Art Deco interiors in the state, and with an enlarged proscenium, reconfigured orchestra pit, improved back of house, and the latest in communications and technology, the theatre is capable of staging shows of all types.

Divided into four main acts (chapters), plus prologue and epilogue, the book charts the history of the theatre year-by-year. From the construction of the Alexandra Theatre in 1886; the JCW years from 1900 (when the theatre was re-named Her Majesty’s); the theatre’s reconstruction in 1934 after the fire; and under Mike Walsh’s direction in 2000 to the present.

From circus and magic, to ballet and opera, comedy, drama and musicals, The Maj has seen it all. The shows are listed chronologically within the text, highlighting the principal stars and other facts about each production. All the shows are represented. There’s Florodora from 1900, JCW’s first big success at theatre; The Merry Widow in 1908 with Australian soprano Carrie Moore; the annual Christmas pantomimes; the spectacular Chu Chin Chow in the 1920s; and White-Horse Inn in the 1930s. Musicals continued to play a big role in the success of the theatre and through the 1940s and beyond hits included Annie Get Your Gun, Oklahoma!, South Pacific, Call Me Madam and My Fair Lady. And the list goes on … Hello, Dolly!, Sweet Charity, A Chorus Line, Annie, Evita … to the hits of today … Miss Saigon, Billy Elliott and Chicago, to name a few. They are all there!

Almost every show has an accompanying illustration, usually in colour. There are stage shots, portraits, programme covers and more. Also, a stunning five double-page spread of photos taken in 2018 by leading architectural photographer John Gollings. Many of the images are sourced from Her Majesty’s own extensive archives, while others come from private and international collections.

Extended captions accompany many of the images providing additional details. Not only the shows, but the stars. There’s everyone from Alfred Dampier, Nellie Stewart and Dorothy Brunton through to Gladys Moncrieff, the Great Franquin, Maggie Fitzgibbon, Peter Allen to name a few.

But it is not just the people on the stage that are feted. Frank also introduces us to the people behind the scenes, the directors, choreographers, musical directors, scene painters and architects.

The book includes a engaging Foreword by theatre stalwart Nancye Hayes. Mike Walsh also contributes a short introduction and epilogue. It has an extensive (and exhaustive) index and Col Bodie’s little caricatures are a delight!

Frank has produced a amazing book and one he can be truly proud off – a crowning achievement to a brilliant career dedicated to keeping Australian theatre history alive. His easy style of writing and keen sense of observation and attention to detail has helped to create a book that is a definite must for anyone who loves Melbourne and especially the theatre. Frank has been ably assisted by Jenny Zimmer (designer) and Jim Murphy (editor) who have ensured that it is a very special and remarkable book.

The book is an absolute steal at $65.00 and is available via the Her Majesty’s Theatre website (https://www.hmt.com.au/her-majestys-theatre-melbourne-the-shows-the-stars-the-stories/) or from all good bookshops.

More in this category: « Pansy 'La Milo' Montague Only Heaven Knows (Part 1) »
back to top