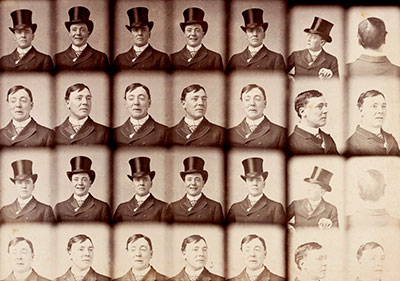 Phil Day, comedian. Photo by Murrell & Co, Sydney, in Album of photographs of actors, actresses, singers, music hall artists and others, c. 1874-c. 1900, State Library of New South Wales, PXD 357 / FL1125174Irish-born English actor Phil Day was born in Cork in 1844, the only son of the Rev. Samuel Phillips Day (1818-1885) and his wife Julia Maria Day. Named after his father, he was the second eldest in a family of five children. By the time of the 1861 census, the Day family had relocated to London and were living in Kentish Town.

Day’s father, the eponymous Samuel Phillips Day, was a man of many talents, a former Benedictine monk, Unitarian preacher, journalist and author, who travelled widely, spending time in America, Canada and Europe. At the time of his death in 1885 he had published eleven books on topics ranging from politics and religion to juvenile crime and the history of tea. During the period of the American Civil War he acted as special correspondent for the London Morning Herald, subsequently writing a book, Life and Society in America.

No doubt due to the peripatetic activities of his father – and as the only other male in a household of women, young Phil Day deciding to try his luck on the stage, despite the disapproval of his parents. A natural mimic, with the ‘rubber-face’ of a comedian, he soon found his niche.

One of his earliest engagements was in 1864 with Charles Calvert’s first company at the Prince’s Theatre in Manchester, where another young hopeful, Henry Irving was also engaged. Through his friendship with Irving, he was responsible for the unmasking of the notorious Davenport Brothers, two bogus spiritualists. When their agent, Dr Fergusson, offered £100 to any person ‘who could perform their feats’, Irving, Day and Frederick Maccabe decided to try their luck. With Irving dressed as Fergusson, and Day and Maccabe as the two brothers, the trio hired the Library Hall of the Manchester Athenaeum, and before a capacity audience, reproduced exactly all the Davenport ‘miracles’ thereby exposing their trickery.

Phil Day as himself, State Library of New South Wales, PXA 2100 / Box 9By 1868, Day was in London, where he established himself a “light eccentric comedian”, performing at the Royalty, Follies Dramatique and Folly theatres. Over the following fifteen years, as well as playing some of most popular characters in the repertoire, he also created many original roles, including Ned Thornton in A Loving Cup (1868); Jonas Chuzzlewit in Pecksniff (1876); Dr Ox in Oxygen (1877); Signor Sproutzo Cabbagi in Balloonacy (1879); Captain Basil Bagot in Bow Bells (1880); Almaschar in Don Juan Junior (1880); and Viscount de Ternan in Diane (1882).

Unfortunately Day was plagued by poor health and in 1883, he accepted an offer from Williamson, Garner and Musgrove to visit Australia, hoping that the warmer climate would prove beneficial. Accompanied by his wife, Emily, whom he had married in 1872, and a young child, they sailed for Melbourne.

Day made his Australian debut at the Theatre Royal in Melbourne on 27 October 1883, playing the role of Daniel Jaikes in the first Australian production of The Silver King. This play also signalled the return of G.S. Titheradge, who played the title role, and Arthur Garner, who played Captain Skinner, the villain of the piece.

Next to the two principals, the chief success of the evening was achieved by Mr Philip Day, a new member of the company, who plays the part of Daniel Jaikes, a delightful old man … His humour runs into pathos, and his pathos brightens into humour, and both are blended at time so ultimately that you find yourself “checking the career of laughter with a sigh”. Mr Day’s identification of himself with the part was complete and unvarying. He belongs to a good school of acting, and may be said to have leaped into the favour of the audience almost at a bound.

As predicted, Day quickly established himself as an audience favourite and went on to play further characters with equal success. These included the Doge of Venice in Estrella (1884) – a role he had performed in London – Mr Mumpleford in Confusion (1884), Bosco Blithers in Mixed (1885) and the title character in Uncle Dick (1886).

Undoubtedly Day’s most successful creation was Bosco Blithers in Mixed, which he introduced to Melbourne audiences for first time at the Bijou Theatre on 5 September 1885. Founded on a French farce called Les Trois Chapeaux [The Three Hats] by Alfred Hennequin, the play was first performed in Brussels in 1870 and in Paris in 1871. Phil Day: "I've Called about a Hat", lithograph by Richard Wendel, Troedel & Co., Melbourne, 1885, State Library of Victoria, H2000.180/53One of the catch-lines in the play is “I've called about a hat”, spoken by the character of Bosco Blithers, a professor of penmanship, calling at the home of the George Selwyn seeking his lost hat, which Selwyn had picked up in place of his own, but then lost again when he picked up another hat.

As Blithers, Day “convulsed audiences with his ludicrous make-up and clever acting, which included giving the impression of having an unmanageable artificial leg” – which in one scene he attempts to raise over the back of a high sofa only to end up floundering on the floor in the most outrageously grotesque manner.

Mr Philip Day, as Bosco Blithers, was the cause of most of the unbounded hilarity which prevailed during the performance. His appearance, his expressions, his gestures, and his antics were throughout extravagantly and irresistibly droll, and evoked from time to time outbursts of unusually hearty laughter. His “make-up” was so clever and complete a disguise in its way as to be worthy of comparison with Mr Frederick Marshall’s Quilp [The Old Curiosity Shop], and he maintained the awkwardness of gait and the various broad eccentricities of the character consistently from first to last. Even if he had no share in the dialogue Mr Day’s appearance and manners would have kept up a simmer of amusement, and he is to be credited with a pronounced success in the character, which, however, is merely of a wildly farcical type.

The origins of the play and the circumstances around its production in Australia are worth recounting.

Included in the cast of the first Melbourne production was a certain Walter Stokes Craven who was said to be the author of the piece. It seems Craven did indeed write it, but a subsequent court case held in February 1887 (when Craven tried to prevent Day and others from producing the piece) revealed that Craven had merely “cribbed” the play, having been a member of J.H. Nunn’s company in India, when the piece was performed with G.P. Carey in central role. On this occasion, the play was announced as the highly successful farce Three Hats by Owen Dove and Alfred Maltby.

When a report of the Craven copyright case was published in the London Era, it elicited a letter from Walter Blount of the Junior Garrick Club (30 April 1887). In his letter, Blount says it was he who sold the play to Nunn for performance in India. And in a twist, not unworthy of the play itself, Blount claims the play he sold to Nunn had been written by Arthur Shirley not by Dove & Maltby. (Indeed, a copy of Shirley’s play was published by Fitzgerald Publishing in New York in 1889 and can be downloaded from the internet).* As Blount points out, Shirley has the character of Bosco Blithers in his text, whereas in both the French original and the Dove & Maltby version, this character is given another name.

So why did Nunn alter the authorship of the play? Was it to capitalise on the London success of Dove & Maltby’s play? As far as I can tell, the Shirley version was not performed in London until the 1890s. Phil Day as Bosco Blithers. Photo by Stewart & Co, Melbourne, in Photograph Album of Australian Actors and Actresses, c. 1870 - c. 1900 [Gordon Ireland Scrapbook], State Library of Victoria, M 6135When W.S. Craven arrived in Australia from India in 1885 he brought a copy of the Shirley play with him, producing it for the first time at the Theatre Royal in Adelaide on 10 June 1885 as Three Hats, announced as a work by Owen Dove and Alfred Maltby – “as played with immense success at the Royalty and Avenue Theatres, London, for over 200 Nights”. This was several months before Craven’s cribbed version was staged in Sydney and Melbourne. And in another twist, Phil Day was in the cast of the Adelaide production, playing Bosco Blithers for the first time!

Interestingly, when G.P. Carey came to produce the play in Hobart in November 1885, with himself as Bosco Blithers, he called the play The Three Hats; or Mixed – and also cited the play’s London and Melbourne success in his adverts. By the time Carey reached Sydney, in March 1886, the play’s title had changed again – to Three Hats Slightly Mixed. In both cases, the author’s name was conspicuously absent.

One final word on Craven’s version of Mixed, for anyone who wants to explore it further. In the Ward Family Papers at the State Library of New South Wales, there is an entry that reads: 1891; 'Mixed', MS., being an adaptation by Walter S. Craven (Call No.: MLMSS 6927/13/2).

Phil Day played the role of Bosco Blithers for the last time at the Melbourne Opera House in September 1887, just two months before his early death on 3 December 1887, aged only 42. He died at the Alfred Hospital from combined complaints of lung and heart disease. He was buried in the “actor’s corner” at Melbourne Cemetery. Among the many mourners who followed his coffin from the Oriental Hotel in Collins Street to the cemetery were G.S. Titheradge, Arthur Garner, Dion Boucicault and George Darrell, who occupied the mourning coach. Day left behind him his wife and young family, a second son Arthur Melbourne Phillip Day having been born in Melbourne in 1884. A subscription list was organised by Arthur Garner, George Darrell and others that raised some £300 to assist his family and aid their return to England.

More in this category: « Framing the Past Pansy 'La Milo' Montague »
back to top