In 2014, the cast and crew of the three big musical playing in Melbourne at the time gathered on the steps of Parliament House. From left to right: The Wizard of Oz, Rocky Horror Show, Les Miserables and The King and IA few years ago, addressing senior students at a performing arts college, I asked them what they understood by the term commercial theatre. None had a clue, and when I explained that it meant performing eight times a week, week after week, it was apparent that this was a concept they had never addressed.

In J.C. Williamson’s heyday, the standard model for producing commercial theatre was this: design, build, paint and rehearse a new show in-house (while another is running, of course), budget to recover all costs in twelve weeks at about 65% capacity while preparing for the next one.

It was not always great theatre, but it was good business. It also provided a workplace where carpenters, painters, props-makers, seamstresses, stagehands and performers found careers. Some worked for the Firm from apprenticeship to retirement. Times change, producers ask their audience to buy expensive tickets for many months; in return the audience wants spectacular shows, short queues, five-star service and excellent air-conditioning. The relationship between producer and venue is contained within the start and end dates of a contract. 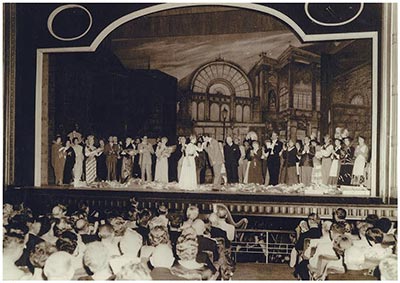 The first Australian production of My Fair Lady opened at Her Majesty’s Theatre in Melbourne on 24 January 1959On the opening night of My Fair Lady at Melbourne’s Her Majesty’s in 1959, it was hot – over 110°F. Legend tells that an announcement was made, allowing gentlemen to remove their jackets. Legend also tells that many did. My Fair Lady broke the mould – it sold out, ran for months, and its success paid for air-conditioning to be installed. About fifteen years later, commercial theatre was in deep decline and a report ordered by the State Government advised that Melbourne had no use for two lyric theatres. Without viable commercial prospects, their preservation was predicted to become a burden on the Treasury. If either were to be retained, Her Majesty’s was recommended because the un-air-conditioned Princess was ‘unusable between October and March’.

We know that these magnificent theatres were reborn and now flourish, but history’s lesson teaches the difference between conservation and preservation. To continue to provide the service that producers and patrons demand, our heritage theatres must adapt, develop, be constantly upgraded, renewed and refreshed, because it is only commercial success that assures their survival.

Few patrons are aware that no government provides subsidy or support to our heritage theatres – people see ‘theatre’ as a public good, so assume there must be some sort of subsidy. The governments of Victoria and New South Wales compete for premiere seasons of ‘blockbuster’ shows that bring a multi-million dollar economic boost and a headline for the government of the day. This support does not contribute to the maintenance of the venue. 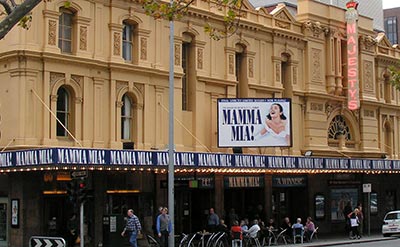 Her Majesty’s Theatre during the run of Mamma Mia!, 2010Investment in major productions is rare without a good run of dates in both Sydney and Melbourne, with gaps in the calendar filled by shorter seasons in Brisbane, Adelaide and Perth. Their shortness reflects a smaller audience-base, but in Brisbane and Adelaide the principal venues, state-owned, have standing commitments to state drama, ballet and opera companies, making seasons of commercial length inaccessible.

This landscape is about to change – Her Majesty’s Theatre in Adelaide, a state asset under the umbrella of the Adelaide Festival Centre, will soon reopen after a $35m renovation raising its capacity to 1500 seats, and the Queensland Government recently announced $125m to build a new lyric theatre in Brisbane. As well, the ACT has improved the Canberra Theatre Centre to a level now enabling it to bid for major musical productions. Opening at Her Majesty’s Theatre in October 2018, School of Rock: The Musical is Andrew Lloyd Webber’s latest Broadway and West End success.Whether these changes bode well or ill for the existing, privately-operated theatres in Melbourne and Sydney will depend on how the calendar is managed, but one thing is certain: the need to maintain them in the fittest possible condition will become imperative. These beautiful theatres, whether or not they are assets of the state, are assets to the community and have become de facto instruments of state policy. For us to be confident they will continue to play their part there must be an ongoing commitment to invest in their future. That the investment will again come from private funds seems unlikely.

The air-conditioning machinery at Her Majesty’s, incidentally, demands careful maintenance but remains in excellent working order.

Matthew Peckham is Manager, Production & Capital Works at Her Majesty’s Theatre in Melbourne. As a full-time professional theatre practitioner he has gained special experience in large-scale musical productions, heritage theatre buildings and employee relations. Over the past forty years, he has been a mechanist, set-builder, set-designer, lighting designer, stage-manager, tour manager, production manager and technical manager. Matthew joined the Committee of Theatre Heritage Australia in 2018.