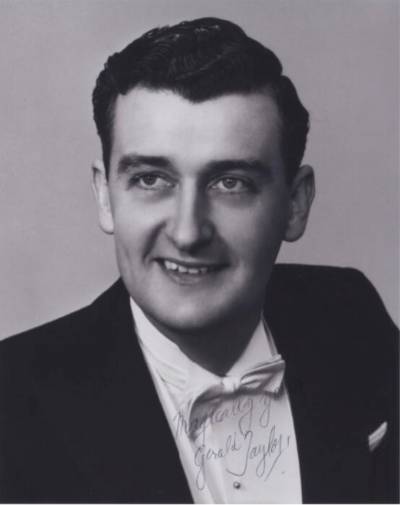 Gerald Taylor, 1957. Photo by Anthony Caton Studio, Brisbane. Courtesy Kristina Forbes.Gerald Taylor devoted his life to entertainment and to the art and history of magic.

When I reflect on Gerald’s wonderful life, I picture three major acts. Gerald started off as a young man learning his craft and was then an in-demand performer on stage and television. He then became a business owner, author, historian, and volunteer who generously shared his experience and knowledge with others.

He was quite rightly acknowledged for achievements throughout his life but most of all he was respected and loved by all those who had the pleasure of being his colleague and friend.

Born in Brisbane in 1927, Gerald Taylor was the only child of Gerald Albert Taylor and May Jerks. In the 1920s his father was recognised as an Australian sprint champion winning numerous races including the Stawell Gift.

While Gerald didn’t follow in his father’s ‘footsteps’ as an athlete, he too had a unique talent. Given a book on magic at the age of eight and left to his own devices while his parents ran the Penfold’s Wine Saloon in Brisbane, Gerald soon learnt tricks and was amazing family and friends with his sleight of hand.

In 1941 when Gerald was 14 years old, he saw The Great Levante’s1 show, How’s Tricks? at His Majesty’s Theatre in Brisbane. Recently returned from a highly successful tour of England, Levante was by this time an internationally acclaimed illusionist whose show impressed the young Gerald.

Like many of his generation growing up during World War II, Gerald left school early to join the workforce. Always conscientious his jobs were however a backdrop to a burgeoning interest in theatre and magic. One of the places he performed at during this time was the American Red Cross Services Club which arranged concerts, musical shows and plays for convalescing soldiers. Gerald could also be seen at the Cremorne Theatre.

Gerald realised that he would need to hone all aspects of his stage presence as part of his development as a magician. Calling it ‘… the best money I ever spent’, he enlisted the help of well-known Brisbane broadcaster Barry Borradale who taught him elocution and voice production techniques.2

The 1950s were a busy and satisfying time for Gerald. While working fulltime, he continued to perform and develop networks with other Australian magicians. In 1955, he sold one of his illusions which became known as ‘The Box of Pam’, to Abbott’s Magical Novelty Company3 based in Michigan. He was also invited by Charles Wicks4 to form the Brisbane Ring of the International Brotherhood of Magicians. The first meeting was held in June 1954 with Gerald elected as President. 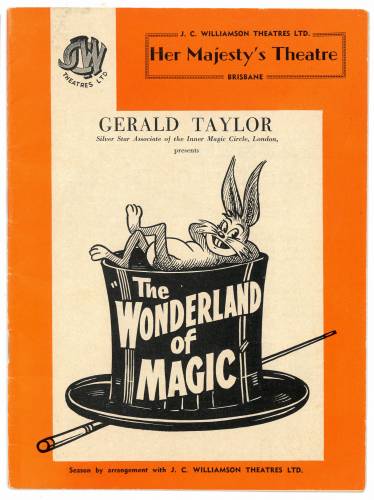 The Wonderland of Magic, Her Majesty's Theatre, Brisbane, 1963 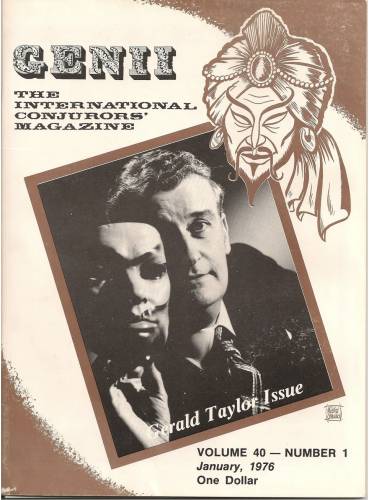 Act 2—The Wonderland of Magic

The turning point in Gerald’s professional career was taking a calculated risk by producing and starring in his own show The Wonderland of Magic at Her Majesty’s Theatre, Brisbane. Presented by J.C. Williamson Theatres Ltd, it opened on the 19 August and ran until 24 August 1963. Audiences were treated to acts such as ‘Sawing a Person in Half’ and ‘The Impossible Trunk Substitution’, as well as being entertained by Will Mahoney. Reviews for the show were positive: ‘In quick succession Taylor performed tricks that never failed to amaze—or frustrate—the audience. He was definitely a top-class magician.’5

With the success of The Wonderland of Magic and the training he had received from Barry Borradale, Gerald had a repertoire of skills that were in demand in the early years of television. He performed on QTQ9 Brisbane in 1959 and on Anything Goes on Channel 2 (ABC TV) the same year. This was followed by appearances on shows including Tonight with Dave Allen, 1963, and The Tommy Hanlon Show, 1967–68. On In Melbourne Tonight Gerald showcased his illusion ‘The 1000 Pound Key Challenge’ and was proud that he was never obliged to pay a hopeful member of the public the cash prize.6

While performing on stage and television, Gerald continued to contribute to national and international magic forums where he was highly regarded. In 1962 he received an award from the International Brotherhood of Magicians, USA for a treatise titled A Revolutionary Approach to Black Art.

Act 3—Magical Nights at the Theatre

After a year performing on the Sydney Club circuit, Gerald moved to Melbourne and began working with Alf Gertler7 at Bernard’s Magic Shop in Elizabeth Street. This was his first introduction to retailing magical apparatus as well as ‘tricks’, and in 1966 opened Aladdin’s Magic Shop which he owned until 1980. After Gerald returned from a period in Queensland, he came full circle by purchasing Bernard’s Magic Shop which he ran from 1986 until he retired in 1990. Gerald’s businesses became a one-stop shop for magicians of all ages who valued his advice and experience.

After selling Aladdin’s, and always looking to expand his horizons, Gerald moved back to Queensland in 1981. He was attracted by the plans to expand Magic Mountain, a theme part at Currumbin, which incorporated the Magic Castle, at that time managed by his friend Arthur Coglan, an escapologist and illusionist. The redevelopment of the Magic Castle featured a larger theatre, and a Magical Hall of Fame which Gerald researched and created and was able to display some of his personal collection. Gerald and Arthur performed in the new venue entertaining audiences until Magic Mountain closed in 1987.

Throughout his life Gerald was interested in the history of magic and in 1980 edited and published Charles Waller’s8 Magical Nights at the Theatre. The book remains a valuable resource on the history of Australian magic. 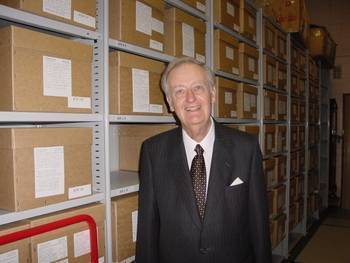 Gerald with the J.C. Williamson collectionGerald was to go on to have another career as a volunteer archivist with the Australian Performing Arts Collection. Gerald’s first task was to catalogue the magical apparatus and provide guidance on their display thereby ensuring that none of the ‘secrets’ were inadvertently given away. Gerald then transcribed oral histories that had been collected by Vicki Fairfax for her book A Place Across the River. Gerald was delighted to move onto the J.C. Williamson Theatres Ltd archive, sorting and organising business records.

Gerald became a loved member of the Australian Performing Arts Collection family. In 1992 he received The Green Mill Award for his ‘Lifetime commitment to the art of illusion in Australia and to the preservation of its traditions and history.’

This was one of several awards Gerald received during his lifetime. He was a member of the Inner Magic Circle of the Magic Circle of London with Gold Star M.I.M.C. and was given a ‘Lifetime Achievement Award in Australian Magic’ at the Silver Anniversary Magical Convention in Melbourne in 1996. An International Brotherhood of Magicians USA, Order of Merlin—Excelsior award followed in 2010.

Gerald Taylor played an important role in ensuring the history of Australian magic would endure for future generations. He was a mentor to many young magicians and performers who sought his wise counsel, as well as being an entertainer, inventor, archivist and gentleman.

Gerald’s ‘wonderland of magic’ will live on.

1. The Great Levante (ne Leslie George Cole, 1892-1978). His daughter Esme embarked on a successful career as a magician.

4. Charles Wicks (1900-1967) was an inventor of magical effects who contributed to international magic journals.

8. Charles Waller 1879-1960 was an Australian businessman, amateur magician, and author.

I would like to thank Kristina Forbes for advice and permission to use photographs of Gerald. Tim Young’s Eulogy provided me with the basis for finding out more about Gerald’s life and achievements.

Special thanks to Maria Cleary, Exhibitions Officer, QPAC Museum for providing access to archival material and reviews of The Wonderland of Magic.

For more information about Gerald Taylor including photographs and to view his Memorial Service go to https://www.geraldtaylor.com.au

MAGICPEDIA was also a helpful resource for research, see https://geniimagazine.com/wiki

Published in Exeunt
Tagged under

Janine Barrand is a cultural historian and senior curator specialising in the performing arts and popular culture.

She was Director of the Australian Performing Arts Collection from 1994 to 2021 and led the development and opening of the Australian Music Vault in 2017.  She has curated 22 exhibitions, most recently the travelling exhibition Stranger Than Kindness in collaboration with Nick Cave and the Danish Royal Library.

Janine is currently working part-time as a Heritage Project Officer, City of Greater Geelong (where she was born) and has completed a residency in the Brunswick Design District researching and producing Revealing Stories: The Hidden History of the Performing Arts in Brunswick and Coburg.

Janine is on the Board of Her Place Women’s Museum.

Photo of Janine by Mark Gambino.

More in this category: « Vale Wilma Farrow
back to top