The Committee is elected by the membership every year at our AGM in March. If you would like to join or learn more about what we do, please contact us or simply complete a nomination form and send it to us.

Jenny Fewster began working on performing arts databases in the early 90’s in her role as Research Assistant at the Performing Arts Collection of South Australia. She joined AusStage, the Australian national online resource for live performance research, when the project began in 2000 and was appointed Project Manager in 2003. During her time with AusStage the project has been successful in gaining over $4 million (AUD) in funding from the Australian Research Council, Australian National Data Service, National eResearch Architecture Taskforce, eResearch South Australia and the Australian Access Federation. Jenny is active in nurturing relationships between university researchers and cultural collections. She is currently Deputy Chair of the Performing Arts Heritage Network of the Australian Museums and Galleries Association (AMAGA) and has served on that Committee for the last twelve years. In 2019 Jenny was honoured to be granted life membership of the The Australasian Association for Theatre, Drama and Performance Studies (ADSA). 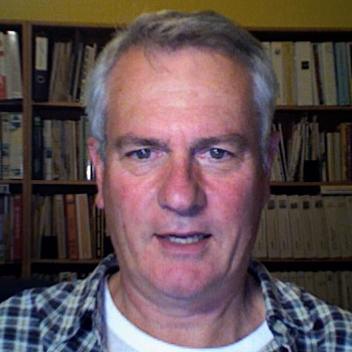 Peter was chairman of the ALSO Foundation’s Special Events Committee that produced the legendary Red Raw and Winterdaze warehouse dance parties from 1992 until 2000. Acting as honorary architect in 1995, he was responsible for the conversion of Shed 14 at Docklands into a permanent performance venue. He has undertaken extensive research into the work of his great great grandfather and Australian’s most prolific colonial theatre architect George R. Johnson (1840-1898). Peter is a heritage consultant and valuer of architectural documents for the Australian Government’s Cultural Gifts Program. He also co-ordinates a theatre buildings study group at the SLV and lectures on the topic at the University of Melbourne. Peter has been a THA committe member since 2006 and was its president from 2008 to 2015.

Elisabeth is a founding member of the Victoria Theatres Trust. Her series Pets of the Public was a regular feature of On Stage from 1999 to 2005, looking at “forgotten” nineteenth century performers. She continues to contribute articles for the THA website, and from 2018 has been editor of the THA Newsletter. As a theatrical historian and biographer she assisted Viola Tait with her book on pantomime – Dames, Principal Boys…and All That (published by Macmillan in 2001) and also worked with her on her memoirs I Have a Song to Sing (published by THA in 2018). Elisabeth has also undertaken research for the Riley/Hailes Scrapbook and JCW Scene Books projects, and is looking forward to working on the Falk Studio album project in 2019. She currently also holds the post of Secretary for THA.

Employed as a graphic designer for almost 23 years at the ABC's studios at Ripponlea, Judy worked on dramas, light entertainment, natural history, children's programs and productions in collaboration with the Australian Ballet and Dance Theatre Australia. From television she segued into set, costume and props design for a small professional ballet company – the Rex Reid Dancers – which toured Australia with "ballet pantomimes" for schools, appearing in most major cities and towns. Following the demise of the company and the death of its director, Judy became involved in amateur musical theatre, designing and painting sets, devising props, etc. She remains passionately interested in theatre and dance design, performance and history. In addition, over the years there have been several forays into children's book illustration, with Penguin, MacMillan and Longman. Judy joined the committee in 2012 and has made many contributions to the THA website and newsletter and is finding herself more and more involved in the organization's activities..

With a background in science and biophysics, Rob is equally at home in the Performing Arts having performed in over 70 stage productions since 1975, including plays, revues and musicals for a number of amateur theatre companies based in Melbourne’s eastern suburbs. As a broadcaster, Rob has been heard on Melbourne community radio 96.5 Inner FM since 1992 contributing to the Local Theatre programme and as the host of the weekly light-music Kaleidoscope and Musical Theatre Melodies programmes. A selection of Rob’s past interviews from the latter with noted theatre composers and/or lyricists, Leslie Bricusse, Frank Wildhorn and Sheldon Harnick, plus musical theatre historian and author, Miles Kreuger can be accessed on the THA website under Digital Collections – audio.

Jasna Novaković is an award winning arts journalist, with particular interest in investigative journalism, as the documentary ‘Yugoslav Theatre Today’, with which she represented Radio Yugoslavia on Radio Cyprus, demonstrates. In parallel, Jasna wrote theatre reviews for RY and feature articles for print media, including the specialized theatre gazette Ludus. After migrating to Australia, Jasna completed her MA in Communications (1996) and her PhD Thesis on the dialectic of myth and reality in Dorothy Hewett’s plays (2006). The greater part of her teaching experience at Monash and Curtin Universities is, however, in the areas of journalism and new media. Jasna’s articles, reviews and translations are published in Overland, Southerly, Australasian Drama Studies, the Australian Studies journal, Hecate’s AWBR and in Mostovi (Engl. Bridges), among others. Brian Friel’s Translations played in Jasna’s translation at the Yugoslav Drama Theatre from 2009 to 2011.

Simon is the Director of Australian Stage Online, an online media outlet for the performing arts in Australia, which he founded in 2005. He completed a BA in Performing Arts in 1991 and has worked extensively as an actor and director. He completed post graduate studies in Arts Management at the VCA/University of Melbourne, and spent a number of years working as assistant manager at an outer metropolitan performing arts venue. He holds a Master of Communications and is currently completing a PhD in audience development. He joined the THA committee in 2016.

Cheryl's self-published book In the Name of Theatre: the history, culture and voices of amateur theatre in Victoria, based on her award-winning PhD thesis with Swinburne University of Technology, received the 2020 Collaborative Victorian Community History Award.

Honorary theatre writer/review coordinator for the Melbourne Observer newspaper since 2005, for over six years she presented the local theatre report on 3AW. Convenor of the Bayside U3A Writers Group, Cheryl directs radio plays for broadcast on 88.3 Southern FM. She has written short plays and full-length productions including the award-winning The Jewel by the Sea at historic Black Rock House. Cheryl worked behind the scenes in ABC Television for 29 years, and is currently Vice President of the ABC Reunion Club.

Sue-Anne is an art historian whose doctoral research considered the liturgical theatres of the rock-cut churches in Cappadocia, Turkey. She has extensive experience in arts development and museums, with the Australia Council, National Gallery of Australia, Museum of Contemporary Art Sydney and Queensland University of Technology Cultural Precinct. In the latter position, she was also the director of the Gardens Theatre Brisbane. She is currently researching late nineteenth and early twentieth century theatre in Australia with a focus on renowned Scottish actor Walter Bentley who toured in UK, USA, Australia and New Zealand from 1873, settling in Australia in 1909. Memorabilia of Walter Bentley’s is housed in the State Library of NSW and the Museum of Applied Arts and Sciences Sydney.

Officeholders and committee members are elected by the membership every year at our AGM in March. If you would like to nominate for the committee or act as an officeholder please complete this nomination form.

A proxy form for use at annual, general and special meetings can be downloaded using this link.